ABBA together after 40 yrs 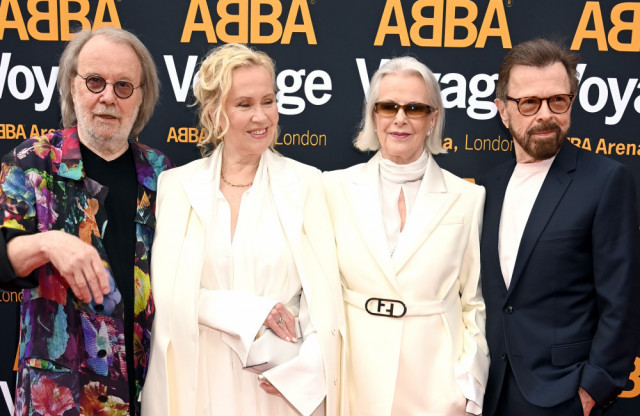 ABBA reunited on stage for the first time in over 40 years at the launch of ABBA Voyage in London on Thursday night.

The iconic pop group, Agnetha Faltskog, 72, Benny Andersson, 75, Bjorn Ulvaeus, 77, and Anni-Frid 'Frida' Lyngstad, 76, opened their long-awaited digital concert at the ABBA Arena and all four members appeared on stage during the finale to take a bow for the first time since closing their final world tour in 1980.

ABBA - who shot to global fame back in 1974 when they won the Eurovision Song Contest for Sweden with the song 'Waterloo', going on to sell 400 million records worldwide - have been recreated as digital holograms for the concert spectacular.

The CGI band take the audience on an electrifying journey through their back catalogue, all spectacularly amplified by the technical wizardry of more than 30,000 lights and a 65 million pixel state of the art screen.

ABBA - whose hey day was rocked by both marriage and divorce - reunited back in 2021 for their chart-topping album 'Voyage' and audience members cheered as new songs 'I Still Have Faith In You' and 'Don't Shut Me Down' were performed by the lifelike avatars and rocked the specially-built arena along with evergreen classics like 'Dancing Queen', 'Mamma Mia! and 'Thank You for the Music' and several others before closing the show with 'The Winner Takes It All'.

The innovative concert was created by VFX company Industrial Light and Magic - with more than 10 million hours needed to create the ABBAtars - and features a 10-piece live band that play live throughout the 95-minute concert.

In the run-up to the concert, the members donned specially created suits during a five-week process to create the digital holograms for the stage and the show sees their counterparts take on digital costumes from a number of modern designers.

Speaking at the opening night, Agnetha and Frida admitted it was astonishing to see themselves recreated as their younger selves on stage.

Agnetha said: "It's an incredible experience seeing everything once it is all in one place. The results are outstanding and we're once again fascinated by the technical wizardry. I'm humbled by it all."

Frida added: "It's hard to fully grasp that it isn't really me and yet it is me. I can certainly see myself in the digital figure - the gestures, the facial expressions, the eyes that express all sorts of feelings. It's absolutely surreal."