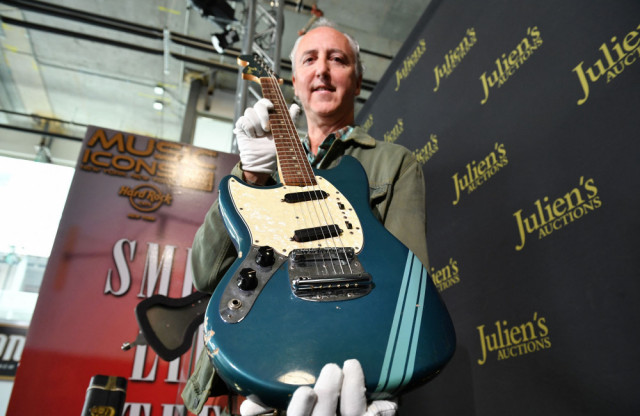 Kurt Cobain's "favourite" guitar has been sold for $4.5 million.

The music legend - who was lead vocalist and primary songwriter of the rock band Nirvana but took his own life back in 1994 at the age of 27 - famously used the blue 1969 Fender Mustang electric guitar in the video for his band's hit 'Smells Like Teen Spirit' back in 1991 and it was sold for a $4,550,000 at Julien's Auctions in New York on Sunday, to the Jim Irsay Collection.

In a statement, Jim - who is in charge of the the Indiana-based pop culture collection - told Rolling Stone: "I am thrilled to preserve and protect another piece of American culture that changed the way we looked at world. The fact that a portion of the proceeds will go toward our effort to kick the stigma surrounding mental health makes this acquisition even more special to me."

The iconic guitar - which is described as being Lake Placid Blue in colour and was the tragic rocker's "favourite" instrument - was initially owned by the Cobain family and was displayed as part Jim Irsay’s extensive collection of rock memorabilia before the collector was able to take full ownership of by purchasing it at the auction.

The Cobain family will reportedly donate a portion of the sale to the NFL team’s Kicking The Stigma mental health awareness campaign and according to the auction website, the guitar still "sounds great" over 30 years after it was first used.

A description reads: "Guitar sounds and plays great. There are wiring issues however with the slide switches in particular. Only the bridge pickup functions. In good condition. The neck is lovely and the early CBS finish is still intact, feeling old and new at once. While it has some scars from wild shows and being bashed, the front of the guitar looks good with a couple of small marks and only the lower ribs showing real damage. Some finish worn off back of body from play. Case in good condition with some tears."

Back in 1991, Kurt said: "But out of all the guitars in the whole world, the Fender Mustang is my favourite. I've only owned two of them."