Has baby at Metallica show 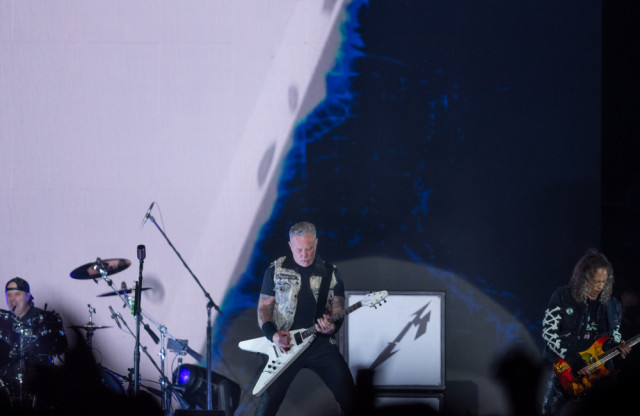 A fan gave birth at Metallica's concert in Brazil on the weekend.

Heavily pregnant tattoo artist Joice M. Figueiró was attending the heavy metallers' concert at the Estádio Couto Pereira Stadium in Curitiba on Saturday when she started having contractions amid their set.

The gig-goer, who was 39 weeks pregnant, didn't make it to the hospital and her son, who she named Luan Figueiró, arrived into the world at 11:15 p.m. to the thunderous sounds of 'Enter Sandman'.

Sharing a picture of the newborn on Instagram, the new mom wrote in a translated caption: “When would I imagine that I would be at the Metallica show at 39 weeks pregnant and this boy decides to be born right there, three songs before the show ends, at Couto Pereira to the sound of ‘Enter Sandman’?”

Joice is not the only one who will never forget a Metallica show, as the band's own drummer Lars Ulrich recently admitted he still gets chills over their first concert.

The 58-year-old sticksman - who made his debut on stage as a founding member of the 'Nothing Else Matters' group in 1982 - reflected on the buzz he felt getting behind his kit that night.

He recalled: "Well, the interesting thing about that first gig was it was just Metallica, on a Sunday night at Radio City in Anaheim, California.

"And on the very first song, 'Hit The Lights', Dave Mustaine broke a guitar string, and so the space between the first song and the second song seemed like a never-ending eternity. It felt like my whole life!

"I was just sitting up there trying to hide behind these drums. It was the strangest thing.

"But Dave got the guitar back together and we ended up playing the rest of the set. But there was a significant lull there. Trust me, I start shivering just talking about it now."