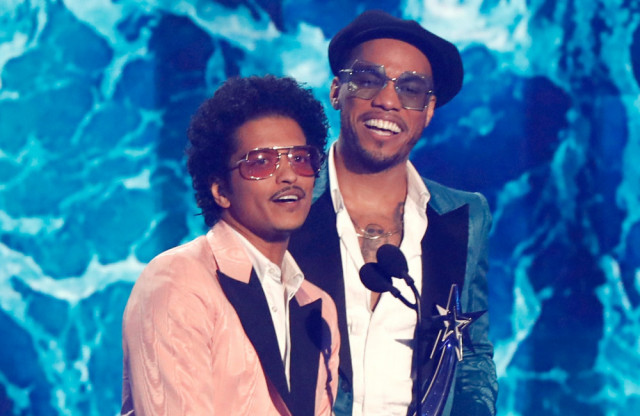 The 'Smokin Out The Window' hitmakers – comprising Bruno Mars and Anderson .Paak – are set to bring 'An Evening With Silk Sonic' to the Dolby Live theatre in Sin City Feb. 25 to April 2.

The 13-date run is named after the pair's acclaimed debut studio album of the same name.

Anderson, 35 - whose real name is Brandon Paak Anderson - said on social media: “The terms is locked and Vegas might not ever be the same Jack!!”

“You’re invited to the hottest show in sin city!”

Bruno said: “Its happening! The sexiest party of the year! Them Silk Sonic Boyz are performing Live in Las Vegas!"

The duo - whose spark for a collaboration came after spending time on tour together in 2017 - made their live TV debut together at the Grammy Awards in March 2021.

Meanwhile, Bruno previously admitted the pair argue "all the time" about their music.

The 'Uptown Funk' hitmaker explained that while they don't always see eye to eye, they usually learn from any clashes.

He said: "Yeah, [we disagree] all the time! That's the beauty of it though. Being able to have a conversation.

"The truth is, every time we disagree that means it's wrong, because when it's right, it's unanimous. You're just fighting to fight.

Sometimes, Silk Sonic songs just came together perfectly though, and debut single 'Leave The Door Open' was one of those moments.

The 36-year-old singer recalled: "That one was a blur, but I do remember you being outside and I brought a guitar out and I started playing chords.

"It started off on an acoustic guitar, and we were just going back and forth... That one just kinda built from all different angles."