This week I want to talk about the incredible volatility that we have seen in the currency market over the past few months. The reason that we are seeing such drastic moves in the currency market is because we are presently in the midst of a global currency war. I have written about this in a past article on a more macro-economic scale. http://www.castanet.net/news/Economics-Made-Easy/76521/Currency-wars Today, I want to look at the impact of currency volatility on a more micro-economic scale.

Firstly, what is a currency war? Currency Wars inevitably take place in an environment of insufficient global growth. This is exactly the situation that the global economy is in today. Simply defined; a Currency War is the effort of one country to improve its economy by devaluing its currency in an effort to increase exports. Essentially, governments increase the supply of their domestic currency on the international currency market which puts downward pressure on the currency and makes domestic exports more attractive to international buyers. As I’ve stated before, this is a moronic process conducted by governments that fail to see the big picture. Increased exports result in increased GDP which allows governments to stand up and say, “Hey, look at our GDP increase. We are a good government, we are growing the economy.” However, decreased value of the currency is highly inflationary and devastating to the citizens of that country. 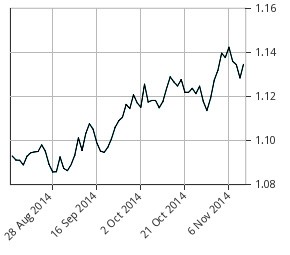 The graph represents the price to purchase US dollars with Canadian dollars over the past three months. We have seen a six cent depreciation in the Canadian dollar versus the US in that period. For those unfamiliar with the currency market this is not only extreme, but it is becoming the norm. So who cares about six cents? Well let’s quantify this with respect to a Canadian importer and exporter. Let’s say a Canadian manufacturer bought $1 million worth of US export in August of this year at 1.0800. His Canadian total would be $1,080,000. If that same importer bought that same product just three months later in November of this year at an exchange rate of 1.1400 the Canadian total would be $1,140,000. That is a $60,000 increase in three months for exactly the same product. Suddenly six cents becomes significant. The same would be true for Canadian exporters receiving US dollars. The only difference is that they would incur a $60,000 gain. Thus this volatility can be both extremely dangerous and profitable at the same time: it just depends which side of the fence you are on.

Currency professionals have tools at their disposal to both protect from this volatility as well as take advantage of it. This ain’t your father’s currency market. Unlike any other time in history it is essential for companies and individuals doing business outside of Canada to be working with a currency pro. And where would one find a currency pro in Kelowna? Nudge, nudge, hint, hint - just take a look at the right side of this column for contact information. Keep your stick on the ice and your head up. As an importer or exporter if you are not paying extreme attention to the currency market, you may find yourself leaving the game in a stretcher.