So it looks like we are finally coming to the end of the government’s bullying of our teachers and our children as B.C. schools are poised to open next week. Without a doubt this has been handled in the worst way possible. But as I always say, if you want something screwed up, managed incompetently or bastardized then put it in the hands of government: They won’t let you down.

The B. C. government had all summer to deal with this issue, but they played politics (as they always do) and they waited until September when public pressure could be a tool that they could use to their advantage. I firmly believe that Christy Clark thought that come September public opinion would be on her side. I think this strategy backfired on her. The majority of the public continued to support the teachers and most importantly, our children. I want to point out that I believe that the strong arm tactics of the provincial government are something that we would not have seen in an election year. I’m also certain that the government will be counting on the electorate to be too busy watching Dancing with the Stars for the next three years and will forget all about this when our provincial election comes around in 2017. Christy will buy some shiny trinket for West Kelowna and she will get back in to continue wreaking havoc.

As I’ve said in many of my past articles, this is not an issue about a lack of funds. We are taxed to death in this province and this country. The money is there it is just spent on things like providing a permanent residence for Ben Stewart in China (the guy who Christy Clark took the riding from), sending Christy Clark over to China and in a few days, a two week trip to India courtesy of you and me. Tell me something, what the hell is the premiere of B.C. and her entourage doing on an all-expenses paid trip to India? This will be her sixth trip to India to promote business. What’s the matter, couldn’t she do it right the first five times?

Question: Do you know who is best at building international business?

Answer: Companies that do international business!

Question: Do you know who is the worst at building international business relations?

Answer: Politicians and ministers of trade who are not in the business and have no stake in the game.

It amazes me that people continue to have faith in the political system. It exists to serve its own under the guise of serving the people. This has been proven time and time again throughout history all over the world. The overt duplicity of government is on display for all to see. But you have to want to see. 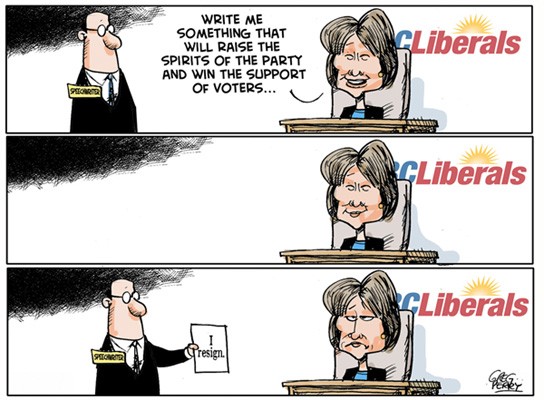