So here we go again, our teachers in District 23 will be invoking strike action once again on Monday. Even with all of the money that is stolen from us by government through taxation, (see my last article) government refuses to channel a sufficient amount of those funds taken at gun point towards educating our children.

Fair enough, so what things does the government choose to fund with their ill-gotten gains? Well, there’s more than enough money to treat Charles, the Prince of I was born with a stick up my butt, and Camilla, the Duchess of chasing parked cars, to a royal tour of Eastern and Central Canada that was paid for by the Canadian tax payers. This latest tour cost us tax payers roughly $2 million for a four day tour. Not bad, $250,000 per day travel budget. I think that is pretty standard for most Canadian families. I’ve pointed this out before that the richest family in the world can’t pay its hotel and restaurant bill when it goes on vacation. Nope, they look to the Canadian tax payers to fund their elaborate frolic. I didn’t ask for these pompous elitists to tour this country! Did you? Don’t forget, Canada still pays a tithing to the royal family. Not to mention, the royal family still owns most of the land in this country. Ever wonder what the term “Crown Land” means? Yup, if you travel far enough down the rabbit hole you will discover this land is owned by the British royal family. 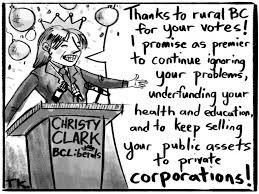 So what else does our government have money for? I didn’t know this until recently. Do you remember Ben Stewart the MLA who had his job taken from him so that Christy Clark could run another false election and become Premiere? Well, I thought Ben simply got a back bencher job in return for his loyalty to his supreme commander. It turns out Christy created a new position in China (grew government as her first official act as Premiere) for Ben Stewart at a salary of $150,000 per year. Do you know what sorts of expenses are associated with deploying a diplomat to a foreign country? There are residential costs, travel, entertainment for other dignitaries (and I use the term loosely) maintenance of the property and the list goes on and on.

Oh well, at least Christy will be sharing the pain of the teachers strike as we all scramble to provide child care for our kids on Monday. Oh wait a second…the strike won’t affect Christy. Her kid goes to private school which is not affected by the rotating strike.