Government: the most organized crime

Two weeks ago I was drinking a morning coffee in Calgary whilst reading the Calgary Herald. I nearly choked when I read an article that stated Alberta Premier Alison Redford had spent $45,000 of the Alberta taxpayer’s money on a five day trip to South Africa to attend Nelson Mandela’s funeral. Now I think Nelson Mandela was a great man, but are you freaking kidding me with spending $45,000 of the people’s money on a personal trip?! Why does the Premiere of Alberta need to attend Nelson Mandela’s funeral? If she really wants to go, then buy all means pony up the cash yourself and hop a flight. Like most politicians she had to travel with an aide. Of course she did; how else would her shoes get tied and who would remind her to look both ways before crossing? This reckless spending comes from a Premiere who cut $120 million from the provincial education budget for 2013-2014. This is the same Premiere who has enacted a salary freeze for all doctors, nurses and every other person who works in the public sector.

However, Mrs. Redford is not alone in her thievery from the people she is supposed to represent. Our own Christy Clark dove into the public coffers to the tune of $500,000 to fund her second attempt to get elected last fall. (This is the official amount from Elections BC. I’m sure the actual amount is much higher).

Earlier in the month Michelle Obama purchased at $12,000 dress, with the people’s money, to wear to a dinner she was hosting for the French Prime Minister. As absurd as this is, it cuts even deeper when you realize that the median annual household income worldwide is $9,733. Of course this does not even address the total cost for hosting the dinner, which is likely in the hundreds of thousands of dollars once all is taken in to account. This isn’t even the tip of the iceberg if we look at the corrupt spending of politicians around the world. 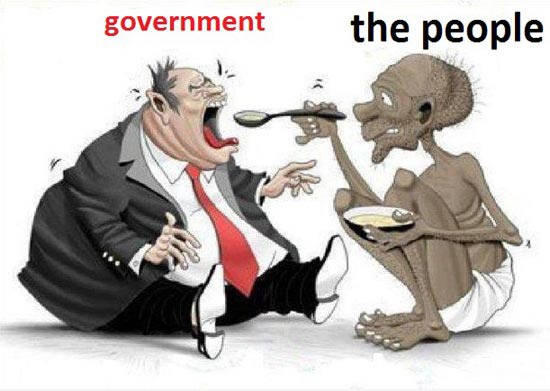 However we constantly hear from politicians and governments that they must find new ways to tax us or else we won’t have roads and hospitals. The truth of the matter is we have plenty of money for roads, hospitals, schools and all of the other necessary expenses that the public deserves. Where we fall short is finding funding to pay for the trips and opulent lifestyles of our political oppressors. This blatant theft from our politicians upsets me greatly and it should upset you also. I was at a dinner party last weekend and a friend was telling me of how her daughter was raising funds for a girl who had been stricken with an illness. It was a wonderful story that illustrated the kindness and caring of the people that surround us in our community. I also read lately of how a significant donation was made to KGH from local efforts. These are heart lifting stories, but the money that is raised by these amazing individuals is a pittance compared to what is being wasted by governments. It’s time that we made our politicians and governments accountable. It is time that they were weighed and measured and I assure you, they would be found wanting.