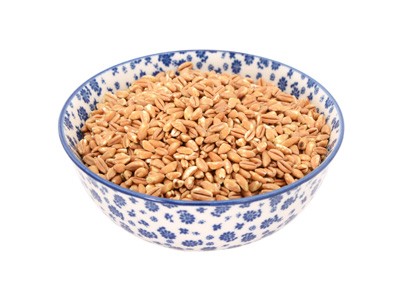 Farro, (an Italian word pronounced ‘FAH-oh’) originated in what’s known as the Fertile Crescent region of the Middle East.  This crescent shaped area crosses borders and stretches from Egypt, north to Turkey and back down to the Persian Gulf. Farro is an old grain and has been harvested for centuries.  It has been found in the tombs of Egyptian kings, which is probably why it’s also called Pharaohs Wheat. It has been said that ancient Romans ate it as a healthy alternative to pasta.

Today this grain can be found on the shelves of most popular grocery stores in a few different varieties.  The varieties deserve some clarification.  Farro is actually a collection of three different grains.  In a store you’re likely to come across Farro Piccolo, Farro Medio and Farro Grande.  Grains from einkorn wheat, emmer wheat, and spelt respectively.  Farro Piccolo is the variety most commonly sold.  Depending on the variety you pick, there are some cooking differences, so pay attention to the packaging.  If you get the whole-grain variety, you’ll want to soak the grains overnight.

So what’s it like? Farro is delicate to chew, much like barley.  Some describe the flavour as nutty with undertones of cinnamon.

Here’s why you should give it a try:

Carbohydrates: All varieties of Farro are a great source of complex carbs, specifically cyanogenic glucosides which have been found to stimulate the immune system, regulate blood sugar levels and lower cholesterol.

Fiber: It’s a terrific source of fiber containing more than other grains, such as brown rice and quinoa.

Protein: Farro can form a complete source of protein when simply paired with legumes like beans, peas or lentils.

Vitamins: Farro contains vitamin B3, also known as niacin, which helps the body break down carbohydrates, fats and proteins.

Minerals: Farro is also a good source of vital minerals such as zinc, magnesium and iron.

You may be wondering how to use this super food. Well, like the ancient Romans, try Farro as a healthy alternative to pasta, or replace that bowl of rice.  Your morning oatmeal could be include Farro, or you could try tossing it in your next pot of soup.  The possibilities are endless!

KyLee Fournier is a certified sports nutritional consultant, living in Kelowna, BC who helps clients across North America make better decisions regarding what they eat.  Her specialty is plant-based nutrition.  She's also one of the minds behind www.Vegbelly.com, a site that interviews leaders in the vegetarian and vegan community.