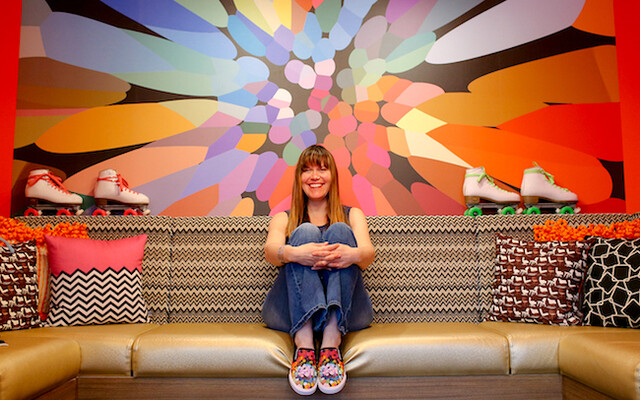 Chutzpah: Some have it, some don’t. Shandra Smith, an international surface designer, has it and isn’t afraid to use it.

Her road to art was different than most; she wasn’t even on it for a good chunk of her life.

She found her way through adversity in the form of fibromyalgia. “Art became my therapy.”

She loved sports and played basketball, volleyball, and soccer while growing up in Saskatoon. Her small high school didn’t have an art program, which wasn't any problem for her. She admitted she just wasn’t into school, however, she cherished the art supplies her parents gave her during her youth.

After high school, she worked in Banff and soon met the love of her life, Fergus, who was from Scotland She sustained an injury in 1997 that started the pain that would become chronic. This didn’t stop their long-distance romance that culminated in marriage in 1998.

They moved to Edinburgh for a couple of years, but returned here to start a family.

Her father-in-law gave her a digital camera to take photos of their children and editing software to experiment with. She moved on to Photoshop and taught herself through trial and error, awakening her inner artist.

She discovered surface designing — any artwork that is intended to be applied to a surface to enhance the way it looks. Computers now make it possible to transfer your art onto any surface.

One day, she realized that her fun on the computer could be much more. She began to put her colourful images on canvas and was one of the emerging artists featured at the U8 — art under $800 — show at Sopa Fine Arts in 2009.

She didn’t sell anything, but learned a lot, and realized she was one of the first digital presenters in Kelowna.

Convinced that there was a market for this form of art, she used chutzpah, courage, and took her art door to door in Kelowna and Westbank. She placed her art in a few places until her dedication paid off; she was invited to do a solo show at A Woodside Design Gallery on Ellis Street.

Much of her art was sold, but she found the carrying, lifting, standing was too much for her body. She needed a new plan.

She started working part-time at the Kelowna Art Gallery and realized artists were her type of people. It was the lifestyle she wanted to pursue, but how?

This drove her to look online for some way to continue working without sacrificing her energy. She discovered licensing art — the borrowing, renting, or selling of permission to put her art on their products.

“You need to be full of yourself, otherwise, you won’t make it.”

In 2015, she was a fan of Favourite Room, a long-running feature in the Globe and Mail.

Shandra and Fergus, as general contractors, helped build a log house that was traditional on the outside and oh, so funky on the inside. She used her chutzpah and approached Favourite Room editor Dierdre Kelly, who loved the pictures of the log house and they did a photo shoot.

She filled the pictures with her surface-designed pillows, bags, lamps. When the article came out, her business skyrocketed.

Shandra noticed Hotel Zed was going to expand to Kelowna. Being ballsy, she called Mandy Farmer, president and CEO of Accent Inns, and sent her pictures of her work.

Mandy liked them but when she saw the Globe and Mail article, she ordered three wall murals —see picture above — and art for every room.

Shandra uses bold colours that radiate happiness. It didn’t take long for companies all around the world to line up for what she does.

At home, she has won the 2017 Art and Design Award from Artsco and has done book signings in Chapters, Opus, Mosaic Books, and Michaels.

All this was done, at home, pacing herself in 20-minute intervals and still having a life. Not bad for not having formal art training.

“You can learn and create this for yourself,” she said.

All of this happened before COVID.

Since then, she did lose some contracts, but has been busy doing art for puzzles.

Actress Michelle Pfeiffer posted on Instagram how much she loved her puzzle as did Hollywood writer/producer Emily V. Gordon. Her puzzles will be sold at MOMA-Hong Kong. Very impressive.

I asked her why her art was so popular. “Beautifully bold colours make me and others happy,” she said.

Her art is joyful, playful, vibrant and happy, just like her.