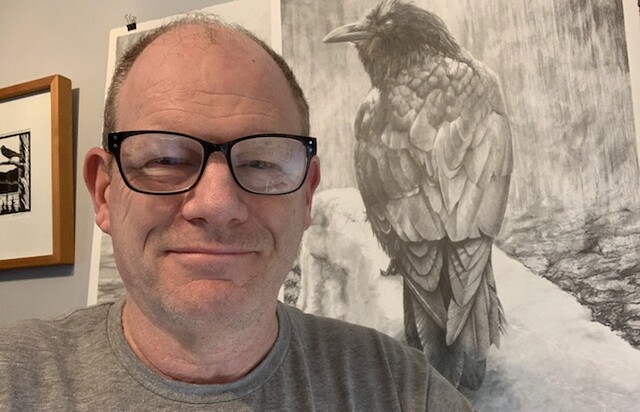 Ravens are clever birds that can be harbingers of death or heralds for good omens.

They can even mimic human speech.

The Pacific Northwest Native American legends portray the raven as the creator of the world.

Edgar Allan Poe’s poem, The Raven, didn't help its reputation. I first heard the poem when I was in Grade 6, and my skin crawled with the insistent tap, tap, tapping, and with the word nevermore.

It was a great poem, a bad rap for the raven, but a great subject for a series of drawings.

Jim Elwood, an artist, and art educator, is creating such a series on the raven.

Conservation of our animals and land is very important to him. “Realism drawn with energy gives back energy,” he said.

Jim grew up in Delta among ravens and boats. He was part of a sports family, so his love of drawing was second to soccer, competitive swimming, and rugby.

A junior high school teacher and a part-time drafting job inspired him to look at art as a career.

He graduated with honours in 1986 from the University of Victoria with a Bachelor of Fine Arts, and then attended the International School of Fine Arts at Banff on a full scholarship.

After the program, he started working at the Mount Pleasant Art Centre in Calgary.

Two monumental discoveries happened that changed the direction of his life.

He’s an introvert and should find teaching daunting, but it was “a natural fit.” He soon received an education degree from the University of Calgary.

No cushy first teaching job for him, he began teaching in the Forrest Lawn district of Calgary, the roughest, toughest inner-city school in the city.

Jim described fires in plastic sinks and regular fights. “They were like wild animals, they watched and would eat you alive or let you live.”

He loved it, and lived to tell me about it.

But they were forced to leave Calgary when then Alberta premier Ralph Klein laid off teachers, and Elwood was low on the seniority list. They moved to B.C. because Lorri's family was in Vernon, and they had heard, incorrectly, that Kelowna was hiring teachers.

He did, however, get a job, and has taught in Kelowna for 28 years, including 15 years at Mount Boucherie.

He likes that art doesn’t have a dedicated curriculum, which allows him to grow with his students.

Teaching has allowed him to bring art and his love of conservation together.

He has introduced nature-scaping, the reintroduction of native plants into the environment, to his students.

He also taught his students to built bat boxes. You can find them at Fintry.

He also teaches at the Kelowna Art Gallery and loves to help adults through the “art trauma moment.” This is the story of when that adult’s art expression was squelched. Unfortunately, many people have such a story.

“I like taking the competitiveness out of art. To get them to realize they are only competing with themselves,” he explained.

In 2017, with his wife, he travelled to London and Scotland. He had time to sit, observe with no running around, draw, and paint.

Lucky for him, Scotland was full of boats, his favourite subject. His website has some of the boats from that trip

This trip took them to the Isle of Skye, where an idea came to him.

When he returned to Canada, he contacted Steve Tinney, a sculptor and teacher at Portee High School on the Isle of Skye.

They began sending students’ artwork back and forth, which culminated, in 2019, with the two schools doing a joint show. He traveled to Scotland with the students’ work and helped set up the show, attend the opening, and spend some time there.

Although he loves to draw, his watercolour and oil paintings are riveting.

I also grew up in the Pacific Northwest and his watercolours of boats bring the squawks of seagulls and the briny smell of the water to mind.

His oils of sunsets bring back that moment when you try desperately to capture the vibrance in the sky only to have it disappear into the night.

What he is working on right now is two-fold. He is:

Teacher or artist, these two things are interwoven in the fabric of his life.

Would you like to experience art through his teaching?

He is offering an outside class, Responding to the Landscape, this summer through Kelowna Art Gallery.

Perhaps you will encounter a raven while on the course.

The raven is a remarkable bird, but not half as remarkable as Jim Elwood.