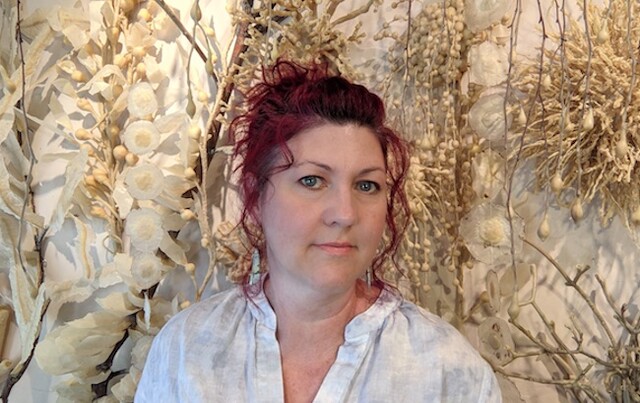 I loved playing in the mud as a kid.

I spent hours making mud pies, squishing mud between my toes and forming grotesque creatures was my kind of fun.

Luckily for my mom, I grew up and traded mud for sand and started making sand castles.

Too bad I didn’t know about encaustic painting and sculpturing; it sounds like my kind of mess.

Angela Hansen, an encaustic painter/sculptor, knows all about this form of art.

Encaustic means to burn in or fuse.In art, it blends beeswax and tree resin and melts them together. You can add pigment to this molten goop and then paint and sculpt with it.

This combination is durable and moisture resistant.

The ancient Greeks used this method to waterproof their ships, and often added pigment and painted them with bright colours.

Greeks who settled in Egypt brought this knowledge with them. They began to paint portraits on wood and put these panels on mummies.

The Fayum Funeral portraits, which date from 100-300 AD, were attached to upper class Egyptian mummies and are in pristine condition today.

How did Angela take something so old and make it contemporary?

She needed to find her visual voice first.

She was born in the 1970s in Cranbrook, but moved to Quesnel when her parents bought a ranch. She grew up among horses and few neighbours — and sketched.

She remembers an art teacher telling her about art schools. She had no idea there was such a thing, but knew right then, she wanted to go to one.

Age seven was pivotal for her. Emily Carr College of Art and Design (ECC) had an outreach program for promising young artists.

Her painting of a sailboat with neon fish and coral underneath was chosen by adjudicators as part of a travelling exhibit.

Her parents took her to Prince George to see her art. Heady stuff for a seven-year-old.

ECC is one of the most coveted art schools in Canada. Getting accepted is not a given, but the passion to attend was now firmly planted in her mind. She was accepted at age 17, after graduating from Quesnel Senior Secondary.

Her parents wanted her to study something that would get her a job, and in 1992, she graduated with a diploma in graphic design.

However, graphic design did not speak to her visual voice.

In 1999, she finished her Bachelor of Design degree from the newly renamed Emily Carr Institute of Art and Design.

The next few years were turbulent with many moves around B.C., working at jobs not related to her degree.

She had the unusual job of chord switchboard operator for Telus. She pulled chords in and out of a board to connect phones on ships.

She enrolled in a teaching and intern program at the University of Victoria, and interned in Kelowna. She has been working as a teacher in Lake Country ever since and received her 20-year pin this year.

Teaching was important, but there was a lost voice deep inside her, hungering to find a medium from which to speak.

First, she took a course with Thea Haubrich, who was elevating encaustic techniques from a craft to an art form.

Haubrich was instrumental in making B.C. an encaustic hot spot globally. Angela had found the perfect teacher at the perfect time.

Second, she took a course on abstract art with Shawn Serfas at UBCO.

These two mediums together woke up the sleeping giant within her. She has been on fire ever since.

She loves dancing between flatwork — painting on a flat surface — and making sculptures.

People have noticed how accomplished and inventive she is, including the judges at CanwaxWest, an umbrella organization for the national Encaustic Canada organization.

I met Angela at the door to her studio. Normally, I sit down and get to work writing. Not this day. I stood gobsmacked.

The wall in front of me was an undersea vision. It was 18 feet long, with three-dimensional flora and fauna from the sea bottom.

For an old scuba diver like me, this was heaven seeing kelp and sea slugs made from this wax.

The work is named Breath, and it took mine away.

This encaustic art kept coming. Behind me was a wall-mounted and framed three-dimensional sculpture of folded arms across a chest with holes in the skin where you could see bones, muscles, and worms.

It is named Consumed and Overwhelmed. This is not easily forgotten.

Encaustic sculptures can also be made paper thin and can appear translucent when back lighted.

Please don’t make me chose between her sculptures and paintings; they are both unique.

Painting with hot wax; who knew? The art work looks like an oil painting until you touch it and look at the fine lines that are etched into the surface.

On another wall, she has a whiteboard chock-a-block full of upcoming events.

If I have tweaked your interest, you will be able to soon see her works.

In this world of having seen everything, it is so enthralling to experience something totally new by such a warm, inviting, and talented artist like Angela Hansen.