A voice speaking in colour 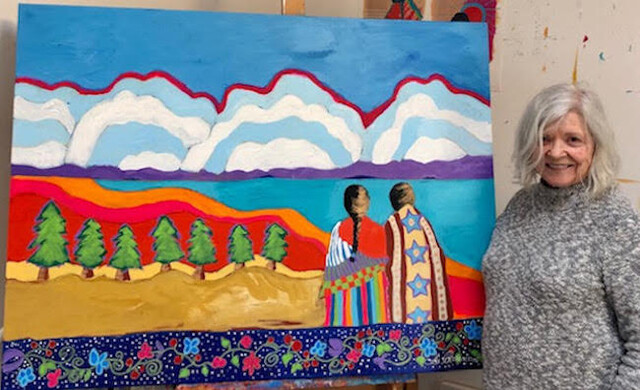 It took Lee Claremont 40 years; 40 years to solidify her voice on canvas.

She worked for many years growing and experimenting, but when she started to speak artistically, it was with a voice bursting with colour.

Claremont, who grew up in Woodstock, Ont., is a contemporary visual artist, but also a wife, mother with Mohawk-Irish ancestry, and a member of the Grand River Iroquois Six Nations in Oshwedeken, Ont.

Art would come and go as she grew up. She had just one drawing class, which she enjoyed, but art wasn’t always part of her days.

“I had a creative mind, but didn’t physically do it,” she explained.

She lived a full life and in 1971, moved with her winemaker ex-husband and three children, ages two, four, and six, to the Okanagan, so he could work for Calona Wines.

Eight years later, they opened Claremont Estate Winery, one of the first cottage wineries in B.C. And she made history - she designed the first art labels for wine bottles. And she was good at it.

The seed of an idea began to grow like their pinot noir and Riesling grapes — the desire for more education mixed with art.

After they sold the winery in 1985, the seed sprouted and she started a two-year certificate program in graphic design at Okanagan College.

That was just the start of her educational journey. She was encouraged by her husband to study fine arts and soon found herself at UBC working hard on her Bachelor of Fine Arts — painting and printmaking,

This meant many sacrifices. She had to leave her family each school year and live in a small room in Vancouver.

The payoff was access to a large university, a degree and meeting different artists and people. Her creative world was expanding.

But there were struggles. The emphasis at school was non-commercial and was on very dark art full of angst.

Lee’s emerging voice was full of colour and at odds with what was expected. She struggled until she received sage advice from her husband to give the teachers what they wanted. Above all, she wanted that degree.

She shuddered as she described the dark paintings she did during this time. She followed that by laughter at her sheer joy when immediately after graduation in 1991, she burst out in colour.

As she was developing her own personal art style, she taught at the En’owkin Centre.

“The students inspired me and I loved it.”

She explained that art has two languages:

She strove to help students understand these languages.

As I sat in her studio, surrounded by her brilliantly coloured art, three paintings faced me — female figures painted with acrylic.

Why do you use acrylic paint?

“I’m an impatient painter. I just don’t like waiting for the paint to dry.”

She also clarified why she uses the word female instead of women. “Female is more universal.”

The paintings were a commission from the Wabano Centre for Aboriginal Health in Vanier, Ont.

As I looked at her female figures, I was aware of the timelessness of her art.

In Our Home and Native Land, her figures could be:

The viewer is invited to journey with her figures wherever the viewer chooses to go. The welcome is personal the acceptance universal.

You will find stars in her paintings, you will always find a star, a reminder of her guardian angel, a daughter who passed away.

Lee likes to ground her paintings with lovely, intricate borders that are reminiscent of beadwork while making her paintings feel contemporary with geometric squares.

As I looked to my left, I noticed two paintings that were not prominently displayed.

One was a whimsical painting by a former student. Right next to it was a painting with stylized feathers, mountains, and a drum with real leather strips and beads.

That painting took her to China.

She had submitted it and was accepted to the Fourth World Conference on Women in Beijing — a United Nations gathering on gender equality and the empowerment of women — in 1995.

Her paintings are colourful, but soft in their messages at first glance.

In the beginning, she admitted she was puzzled when in gallery shows, some people walked by with hardly a glance.

How rewarding it must now be with her commissioned works and international recognition. She has permanent, corporate and private collections throughout the world.

How satisfying for her soft, but vital voice to finally be heard.

I asked her if she had a message she wanted to convey.

”Work hard and follow your dreams — easier said than done because it takes a lot of courage.”

It was hard to say goodbye to all those females on the canvasses, but I also realized they had invited me back. This was not a chance meeting.

If you want to journey with Lee’s paintings, you can find her at www.leeclaremont.com.