Locked into a dream 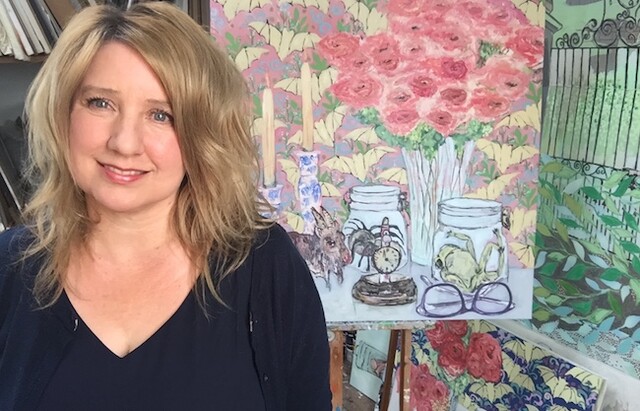 Wanda Lock used to paint in secret, up in her bedroom.

She didn’t want to be labelled because she didn’t fit the artistic stereotype.

“Labels have expectations, a prescribed path of who you are,” she said. “As soon as you are called an artist, it restricts you as a person."

For someone who didn’t want to be limited by labels, she has collected some along the way to becoming who she is today — a full-time professional artist and part-time curator.

Wanda the artist grew up on a farm in Oyama. Topics important to her, such as art and feminism, weren't talked about.

After high school, she began to search for her artist self, and studied at Okanagan University College from
1987-89.

She attended Emily Carr University of Art +Design, Vancouver, 1989-92, and received a four-year diploma in studio practice. People went to Emily Carr to become an artist not a teacher in those days, certainly not a curator.

These were heady times for artists. It was the middle of the Grunge music movement, Nirvana was at its height and Generation X was flexing its muscles.

After graduation from Emily Carr, she shared a studio with eight other female artists on Hastings and Cambie streets in Vancouver.

These years when in her 20s were good times. A time for exploration and growth while surrounded by fellow artists.

Vancouver soon became too expensive, so she returned to the Okanagan.

She renewed her friendship with her childhood friend, Greg, and they eventually married and settled down in Okanagan Centre.

Opus Art Supplies was her go-to art store in Vancouver.

When she heard they were opening one in Kelowna, she applied to work there. Soon she was managing it.

Opus Art Supplies is a place where artists meet, teach, share ideas and grow. She would work there all day — she only left in 2006 — and paint all night.

During her Opus time, after it and continuing today, she has a serious art practice. She is in her studio every day unless she is out of town. Her studio is a working one, not a gallery for people to come and buy.

I felt privileged to sit among her artistic off-springs. She explained that she often has three to four projects going at once.

Her inspirations come from readings that make her contemplate the plight of women and life.

I admired her current three projects:

She used three kinds of stencils – one bought, one cut by hand and one made by her.

“Because they feel different,” she said.

The colours and layering of objects open up one’s imagination and interpretation and I only saw five feet of it.

She is not one to take the low-hanging fruit. Rather she ponders and crystallizes ideas and puts them on canvas to tantalize the viewer to do the same.

Although her works are often themed; they don’t corral thoughts, but rather open the viewer's mind to other interpretations. She creates a dialogue between herself and her viewers.

Her solo exhibitions exemplify this:

Six years ago, Wanda, the curator, came into being when she began to curate at the Lake Country Art Gallery (LCAG), a public art gallery with eight exhibitions a year – four member-community-based and four curated exhibitions with the artists.

Historically, you wouldn’t normally find an artist in a curator position.

A curator is employed by a museum or gallery to manage a collection of artworks or artifacts. Curators care for, restore, and develop collections through exhibitions, publications, events, and presentations.

Curators are interested in an artists’ work and what they are trying to convey.

The word curator, like the world, is constantly changing. Universities now have degree programs for learning the art of curation under their art degree umbrella.

“The rapport between artists and curator can be brilliant. After all, I have been with the LCAG for six years now. I bring the mature artist-curator – artist dynamics to curating.”

What a bonus for us.

She didn’t want to be labelled and kept her art a secret. These labels don’t limit her, but rather give her freedom to explore, execute and excite.

To spend an afternoon with her among her works was like spring — a riotous joyous thing.