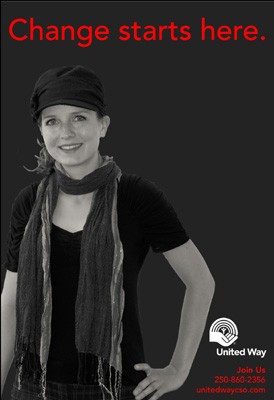 Photo: Contributed
Aimee Jensen is a Settlement Worker at Kelowna Community Resources (KCR), a Community Partner of the United Way of the Central and South Okanagan Similkameen.

Connection is a necessary element for living a healthy and successful life. When we are connected to other people and our community, we feel supported, listened to and valued. When we are connected to other people, our struggles, challenges and obstacles appear more manageable and life is brighter. At its core, Kelowna Community Resources (KCR) strives to build connections between individuals, families, community organizations, social supports and the greater community and is proud to be a part of Sachie and Doris’ story.

Sachie and Doris arrived in the Central Okanagan with their families approximately two years ago. Although they immigrated at different times from different countries and to different parts of Canada, both acknowledged that initially, adjusting to life in Canada was very difficult. When asked what advice they would give to someone who has just immigrated to Canada, Sachie and Doris shared, “There will be lots of cultural shock, and the first few years will be tough, but by keeping a positive attitude, an open mind and refusing to give up, things will get better.”

Upon arriving in the Central Okanagan, both Doris and Sachie started meeting with Settlement Workers at KCR, where they received support and information about adjusting to life in the Central Okanagan and Canada. It was at a job preparation workshop organized by Kelowna Community Resources where Doris and Sachie first met.  After the workshop, they met for coffee, where they first discovered many mutual interests including the environmental aftermath of Fukushima nuclear disaster. What was intended to be a brief visit turned into a multi-hour conversation as they discussed their shared passions. They continue to meet for coffee, have started arranging play dates for their children and regularly attend the monthly International Potluck Night at KCR’s Gathering Place program.

Regarding their friendship, Doris told me, “I feel a connection with Sachie. While I was getting used to Canada, I felt like I had lost a part of my personality and had not been able to find such a deep friendship in Canada until I met Sachie. Sachie supports me a lot and is so positive, she really helps me to focus on what I can do to make myself happier.” Similarly, Sachie has nothing but kind words for Doris, saying “Her unique stories and experiences bring spice into my life.” Both also acknowledged the important role that KCR played in their adjustment. “ I am very grateful for all of the workers’ help,” quotes Doris.

With time, perseverance, friendship and connecting with organizations such as KCR, Sachie and Doris have overcome many of the challenges of starting a new life somewhere different and are happy to call Canada their home.

The mission of United Way is to improve lives and build community by engaging individuals and mobilizing collective action.

We call this our Community Impact Mission. Community impact is about achieving meaningful, long-term improvements to the quality of life in Canadian communities, by addressing not just the symptoms of problems but also getting at the root causes. It’s about making fundamental changes to community conditions.

United Way is achieving this mission by moving people from poverty to possibility, promoting healthy people and strong communities, and supporting all that kids can be.