Smoked out by Siberia 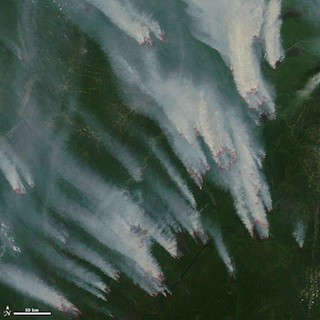 It may be forest fire season but the smoke in the Okanagan Valley is not from a local wildfire.

The lingering haze has blown over the pacific from Siberia.

Fire information officer Keven Skrepnek says the smoke is from the same wildfires that were burning in Siberia over a month ago.

"It's actually getting caught in the jet stream and then once it hits our shores, it starts to do an inversion and gets trapped in the valley bottoms."

The smoke is moving west to east and was first reported to the fire information centre early Monday afternoon by residents of Tulameen and Princeton.

Skrepnek says forestry conducted air patrols throughout the interior to ensure the smoke was not coming from a wildfire burning within the area.

Currently there is only one wildfire burning in the province, it is located 40 km south west of Merritt and is 20 hectares in size. According to Skrepnek smoke from this fire is headed north and not into the Okanagan.

Forestry is predicting the Siberian smoke should continue heading east toward Alberta.

However Environment Canada is forecasting thundershowers in the Okanagan Valley for Tuesday that could help to dissipate the haze.