The owner of an alleged chop shop in West Kelowna is back in jail on new charges stemming from a raid on a Peachland home over the weekend.

John Edward Newcome was arrested at the home in the 4200 block of Beach Avenue Saturday evening. 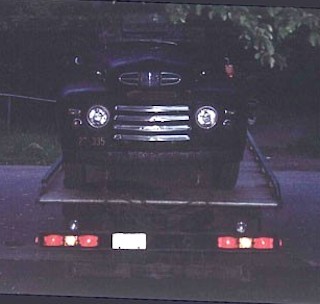 Photo: Contributed
A rare 1949 Mercury pick-up, stolen from a Kelowna business last year, was recovered during a raid on a Peachland home over the weekend.

Acting on a tip, police raided the home and found a rare 1949 Mercury pick-up truck that had been reported stolen from A Timeleigh Motorcars over the Easter long weekend in 2012.

Newcome was held in custody over the weekend on charges in relation to Possession and Trafficking in stolen property as well as Breach of Recognizance.

Newcome was free on bail at the time of this latest arrest. He still faces 17 charges including possession of stolen property and trafficking in stolen property, after the RCMP raided Cycle Logic in August 2012.

That trial was scheduled to begin last week, however, Newcome elected to move the case from Provincial Court to Supreme Court.

At the time of the original bust, Kelowna RCMP Insp. Rick Flewelling called it a 'significant' property theft and trafficking operation.

Newcome's home was also raided in August of last year as part of the raid of Cycle Logic.

Kelowna police said at the time the business had ties to Nanaimo and Southland (Calgary) Chapters of the Hells Angels as well as the Throttle Lockers and Kingpin Crew from Kelowna.