A new poll suggests that more Canadians are in debt this year and taking longer to settle their accounts.

The study released Wednesday by the Bank of Montreal (TSX:BMO) found that 83 per cent of Canadians surveyed admit to having some form of debt, an increase from 74 per cent a year earlier.

But the poll also found that the average amount of monthly debt repayment has fallen by 13 per cent from a national average of $1,138 to $986. Regionally, those in Alberta had the highest amount of debt payments each month at $1,225, while those who live in Quebec reported the least amount at $768. 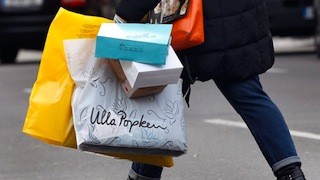 Photo: CTV
A new poll suggests that more Canadians are in debt this year and taking longer to settle their accounts. (AP / Michael Sohn)

BMO vice-president Janet Peddigrew says these results could indicate two things: either people are having more trouble making high monthly payments, or they're in no hurry to pay down their debt due to current low interest rates.

"We've had prolonged interest rates for a few years now, allowing people to take on more debt while still ensuring that it's affordable so they're able to manage the debt that they have," she said.

The annual poll also found that nearly half of those surveyed said their household debt has decreased in the past five years, compared with 28 per cent who said it has increased during that period. More than half said they plan on being debt-free within five years.

Meanwhile, a majority of homeowners said they anticipate being mortgage-free within 10 years and a third said they can do it in five years. Twenty-nine per cent plan on paying down their mortgage within the next year.

Peddigrew cautioned that Canadians shouldn't be lulled into thinking low interest rates will last forever, and that debt left unpaid now can be as easily handled in the future.

"If there is any message that comes out of this is to be prudent and look at reducing your debt levels now that (interest rates are) still low because we all know that they're going to start creeping up," she said.

"Time is of the essence. If you can afford to pay more on a monthly basis, do it and get it reduced."

The largest source of debt cited by Canadians polled was a mortgage, at 34 per cent, followed by car payments at 19 per cent and student loans at 14 per cent.

The online poll done by Pollara surveyed 1,005 Canadians on their debt levels and repayment between July 12 and 16.

The polling industry's professional body, the Marketing Research and Intelligence Association, says online surveys cannot be assigned a margin of error because they do not randomly sample the population.