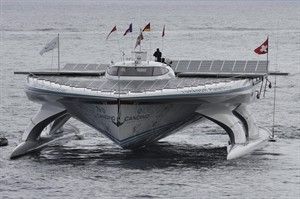 Photo: The Canadian Press. All rights reserved.
The MS Turanor PlanetSolar, the world's largest solar boat ever built, arrives in the harbour of Monaco after it has achieved the first around-the-world journey using solar energy in 585 days, Friday, May 4, 2012. The MS Turanor PlanetSolar made its first Canadian stop this week when it arrived in Halifax as part of an expedition across the Atlantic Ocean and along the Gulf Stream. THE CANADIAN PRESS/AP, Bruno Bebert

An unusual, solar-powered boat could be the key to unlocking secrets of the sea and climate change, say researchers who've been zigzagging the waters off North America's east coast for more than a month.

The MS Turanor PlanetSolar made its first Canadian stop this week when it arrived in Halifax as part of an expedition across the Atlantic Ocean and along the Gulf Stream.

"It's very exciting science that we're conducting," Gerome Kasparean, one of four researchers aboard the vessel, said Thursday.

At 35-metres long, PlanetSolar is billed as the biggest solar boat ever built and is powered exclusively by the sun.

Since its arrival in Halifax, crowds of curious passersby have gathered to get a closer glimpse of the Swiss-owned, German-built catamaran, which boasts 520 square metres of shiny solar panels on its sun deck.

"It's incredible. I've never seen anything like this before," said Trent Perrott, 55, who stopped along the waterfront to look at the vessel.

The boat sits on large floaters, making the hull appear as though it's hovering over the water's surface and lending to its futuristic, UFO-like appearance. The solar panels charge batteries stored in the floaters which, in turn, power the boat's electric motors.

On board are five crew members and four researchers, who are collecting data in hopes of better understanding the interaction between ocean and atmosphere and how that affects climate change.

All but one of the researchers, including Kasparean, are from the University of Geneva in Switzerland. The other researcher is from the Woods Hole Oceanographic Institute in Massachusetts.

The team is focusing their efforts during the 8,000-kilometre trip on the study of ocean eddies -- large, swirling vortices that affect heat exchanges with the atmosphere and phytoplankton growth.

Most importantly, working aboard the vessel allows the researchers to gather data that's untouched by emissions.

"It has no diesel propeller, which prevents any self-made pollution," said Kasparean, a researcher in applied physics.

"And at the same time, it's a motor ship so we can control the trajectory and choose with quite a lot of flexibility where we want to go."

Plus, the eye-catching boat allows Kasparean's team to sail in style. It was built about four years ago and in May 2012 completed the first solar-powered trip around the world in 584 days.

The latest voyage began in March in France. The vessel has also made stops in Miami, New York and Boston along the way to Halifax.