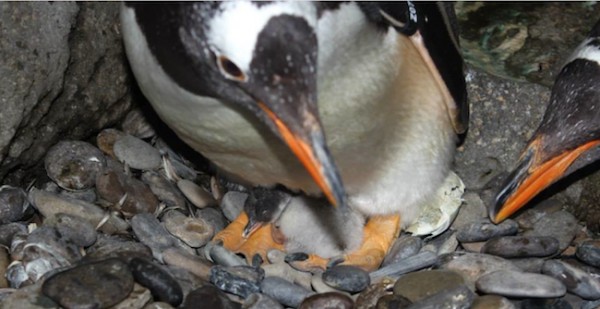 The flood-damaged Calgary Zoo will have a new baby to show off when the animal park partially reopens at the end of the month.

The zoo says a gentoo penguin chick successfully hatched July 7 after both parents took turns incubating the egg over 37 days.

It's the first penguin hatched at the zoo since the opening of the Penguin Plunge exhibit in February 2012, but it's too soon to determine whether it's a boy or a girl.

Parents Lachlan and Giselle were both single birds when they arrived in early 2012 from SeaWorld in San Antonio, Texas.

The pair, which got together last winter, are sharing the care of their fluffy chick.

The zoo was hit hard by extensive flooding in southern Alberta last month, but plans to have a few exhibits, including the Penguin Plunge, open by July 31.

"This is such a wonderful announcement to be able to make in the face of the current challenges the zoo is dealing with from the flood," said Malu Celli, curator of the penguin exhibit.

"It shows the resiliency of nature and that life continues in spite of those difficulties."

Damage at the zoo has so far been pegged at $50 million, with another $10 million in lost revenue. Almost 290 seasonal and permanent staff have had to be laid off.

It's expected to take five months before the facility can fully reopen.

The zoo is located on St. George's Island east of downtown and was swamped by floodwaters from the swollen Bow and Elbow rivers. Forty buildings, including the African Savannah exhibit, were severely damaged.

During the height of the flooding, the zebras were moved to the zoo's wildlife conservation centre outside the city and about 160 animals had to be moved to higher ground. Two hippos almost escaped when high water levels lifted them close to the top of their enclosure.

Giraffes were standing up to their bellies in cold water were ailing after the flood, but recovered. Two peacocks, a pot-bellied pig and a variety of fish died.

Last week, the zoo announced the South American exhibit was too damaged to be restored. Its animals are being shipped to other accredited zoos in Canada starting this week.