Alberta flood report did not sink in 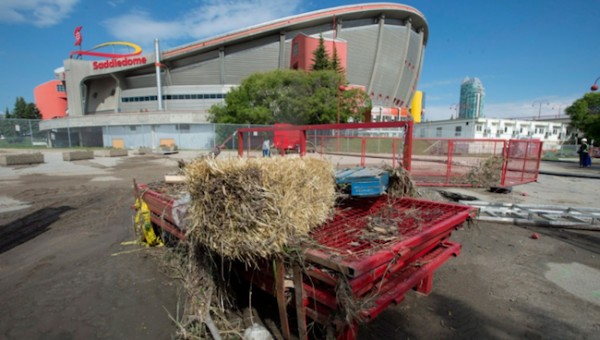 An expert says devastation could have been reduced in southern Alberta if the government had followed its own report on how to lessen the effects of severe flooding.

The report was completed by a government task force in 2006 in the wake of a flood the previous year that killed three people and caused $400 million in damage in many of the same communities hit by high water in recent days.

"In my opinion, if this report had been implemented, I sincerely believe that the damage we are seeing right now could have been reduced," Paul Kovacs, executive director of the Institute for Catastrophic Loss Reduction, said Monday from Toronto.

"I thought this report did a really good job covering the right topics and offering very specific advice on what should be done."

It also called on the government to stop selling Crown land in flood-prone areas and to prohibit disaster recovery payments for new, inappropriate developments in flood risk zones.

Seven years later, it's not clear how many of the report's 18 recommendations have been put in place.

Municipal Affairs Minister Doug Griffith said some work has been done but there is no way all of the report's recommendations could be fully implemented.

"It is work in progress, I don't think you could ever fully complete all of the recommendations," Griffiths has said.

"No matter how much mapping you do, and how much mitigation you do, there are still going to be some risks because it is hard to move a whole community back five miles from the river."

When the task force submitted its report in 2006, which included input from four cabinet ministers, it estimated it would cost $306 million to fully implement the recommended flood mitigation strategy.

On Monday, Premier Alison Redford announced the province will spend $1 billion to kick-start the first phase of recovery from she has called the worst flooding in the province's history.

The Alberta government plans to hold a technical briefing in Calgary on Tuesday to explain its response to the 2006 flood mitigation plan, which the government released to the public just last summer.