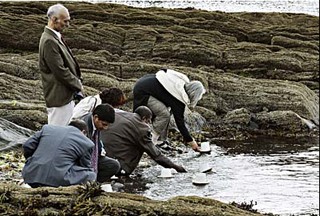 Canadian victims of terrorist attacks are the focus of a national day of remembrance today, says the office of the prime minister in Ottawa.

"On June 23, 1985, Canadians experienced the most horrific act of terrorism in our history when a bomb on Air India Flight 182 killed all 329 passengers and crew members aboard, 280 of them Canadians."

It was, and remains, the worst act of terrorism ever perpetrated upon Canadian people.

“Today, we pay tribute to the memory of victims of this atrocity, and to those who have lost their lives in other acts of terrorism, including during the September 11, 2001 attacks in the U.S., and, recently, the Boston Marathon bombings and the terror attack in Woolwich, London," said the Prime Minister today.

“On this day, we also stand in solidarity with all families affected by terrorist acts, and honour the memory of civilians, soldiers, diplomats, international aid workers and journalists targeted by these hateful crimes.

“As we mark the National Day of Remembrance for victims of Terrorism, we are reminded that acts of terrorism continue to plague many regions in the world and constitute a serious threat both to democracy and fundamental rights and values.

“Our Government has taken numerous steps in the fight against terrorism. Canada has been in the forefront in combating terrorism abroad, most notably in Afghanistan where Canadian soldiers and diplomats continue to serve to prevent that country from again becoming a base for terrorism.

Most recently, we passed the Combating Terrorism Act (Bill S-7) which will help disrupt plans and preparations for terrorist attacks and to investigate past acts of terrorism. Just last week, the Conservative government passed Bill S-9, which will allow Canada to take measures, as part of its commitments under international agreements, to prevent nuclear terrorism.

“The elimination of terrorism continues to be at the forefront of our government’s priorities," said Harper. "The numerous memorials built in Canada and around the world to honour the innocent lives lost through such acts serve as a reminder of the need for continued vigilance.

"We stand together with our friends and allies in our determination to rid the world of this scourge.”