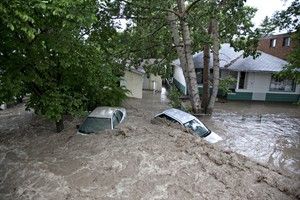 Photo: The Canadian Press. All rights reserved.
Submerged cars sits in the flood waters in High River, Alta. on June 20, 2013 after the Highwood River overflowed its banks. THE CANADIAN PRESS/Jordan Verlage

Calgary's mayor is warning that the worst of the flooding is yet to come after a significant portion of his city's population spent the night pulling back to higher ground.

"I grew up here. I spent a lot of time on the Bow and Elbow Rivers and I have never seen the river that high or that fast," Naheed Nenshi said at a news conference early Friday morning.

Heavy rains eight years ago caused flood damage to about 40,000 Calgary homes and resulted in the evacuation of more than 1,500 Calgarians. It resulted in $275 million in insured losses.

Nenshi said this is worse.

"The Bow River, when I saw it, looked like you were looking at an ocean. And I was there standing on that same bridge in 2005 and this is no comparison."

Low-lying areas along the river started to flood Thursday night and there was water filling up some underpasses.

There was water in the streets of the Bowness area in the city's northwest. The city has not said to what extent any homes have been flooded.

Entire neighbourhoods all along the two rivers have been cleared of inhabitants. City officials have estimated that as many as 100,000 could be out of their homes.

Police urged people to stay away from downtown and not go to work. All schools, both Catholic and public, are closed, while Catholic schools in Chestermere, Airdrie and Cochrane were also to be shuttered.

The Calgary Zoo, located on St. George's Island, closed its gates and started taking steps "to secure and move animals to safe locations."

Contingency plans called for big cats, such as lions and tigers, to be moved into prisoner cells at the Calgary courthouse. But the city said that hadn't happened yet.

He said it appeared that the smaller Elbow river had reached its peak. The same could not be said for the larger Bow.

"Particularly on the Bow, the worst is yet to come. We anticipate that when we see release from dams upstream of Calgary, we will see a flow rate in the Bow River that might be 30 or 35 per cent higher than even what it is right now."

When Calgary officials began their evacuations, they found some people were steadfastly determined to stay.

Deputy police chief Trevor Daroux said all officers could do was stress the dangers of staying, but admitted officers aren't in a position to remove anyone physically.

"These are hazardous areas," he said. "There will not be power once the areas are evacuated, and gas as well. So we're asking people to please comply and leave on their own."

Police were also concerned about the possibility of looters taking advantage of the thousands of empty homes.

"That's why we have a plan in place. And as we evacuate the area, we will be backfilling with security forces."

The traditional Edmonton-Calgary rivalry went by the wayside, with the capital city promising to send 100 of its police officers today to help out where needed.

It had been a rainy week throughout much of Alberta, but on Thursday the Bow River Basin was battered with up to 100 millimetres of rain. Environment Canada's forecast calls for more rain today in the area, but in much smaller amounts.

Calgary is not alone in its weather-related woes. There were flashpoints of chaos from Banff and Canmore and Crowsnest Pass in the Rockies and south to Lethbridge.

More than a dozen towns declared states of emergency, with entire communities including High River and Bragg Creek under mandatory evacuation orders.