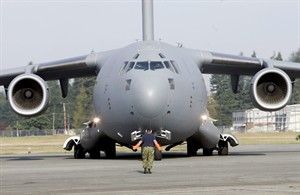 Photo: The Canadian Press. All rights reserved.
An official guides a C-17 Globemaster III into position after landing at the Abbotsford International Airport, in Abbotsford, B.C., Saturday, August 11, 2007. Canada is contributing one of its large C-17 military cargo planes to deliver supplies to the capital of Mali after a request from France. THE CANADIAN PRESS/Richard Lam

Canada is contributing one of its large C-17 military cargo planes to deliver supplies to the capital of Mali after a request from France.

But Prime Minister Stephen Harper insists no Canadian Forces personnel will be involved in any combat action in the landlocked West African country. And he says the transport plane commitment will be short.

An al-Qaida-linked group has seized the northern part of Mali and is advancing south.

The Canadian plane will be used to transport equipment and supplies into the Malian capital of Bamako, which is not in the combat zone.

France, which began air strikes last week against insurgents in the north, has ordered the immediate evacuation of all French nationals living in the Malian town of Segou.

"There is a serious situation in northern Mali, where there is a large territory now occupied by essentially terrorist entities, who are looking at expanding their influence throughout Africa," Harper said at a Montreal news conference.

"This is a serious enough matter that it has been the subject of a United Nations Security Council resolution supported by all permanent members demanding that there be some kind of international action.

"Our allies, the French, have decided to take the lead on that and have requested specifically from a number of allies, including Canada, very limited and defined support in the form of heavy lift logistical support."

The C-17 has been committed for only a week.