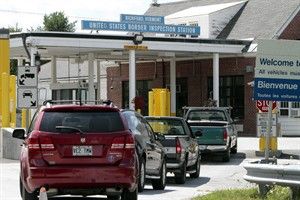 Photo: The Canadian Press. All rights reserved.
Cars line up at the United States port of entry from Canada in Richford, Vt. in this Aug. 10, 2011 photo. THE CANADIAN PRESS/AP-Toby Talbot

A much-ballyhooed perimeter security deal between Canada and the United States will come with a $1-billion price tag for new border facilities and programs to make trade and travel easier, The Canadian Press has learned.

The Conservative government will use money cut from existing programs to cover the hefty cost of the international pact an attempt to protect the continent from terrorist threats while speeding the flow of people and products across the 49th parallel.

The deal, as described by several sources, is more evolutionary than revolutionary, falling short of the grand vision outlined with fanfare eight months ago when Prime Minister Stephen Harper and U.S. President Barack Obama announced negotiations.

Emblematic of this reality is the fact there are no immediate plans for a prime ministerial-presidential announcement of the agreement to be unfurled this month because the Prime Minister's Office has been unable to persuade the White House to make Obama available.

Canadian officials are heading to Washington this weekend to make a final pitch for a public signing ceremony.

"It's very incremental, it not big and visionary," said a source with detailed knowledge of the deal. "Which is why the White House is saying, 'Really, you expect the president to announce a working group?'"

Sources spoke on condition of anonymity because they weren't authorized to discuss the pact ahead of its public release.

The so-called Beyond the Border action plan will include some three dozen items the governments plan to pursue together. A number could be in place within months while others would take as long as four or five years to implement.

Harper has placed strong emphasis on "the things that can be done quickly" picking the "low-hanging fruit" as opposed to a broad, sweeping agreement that addresses every possible border issue, said one person who was briefed on the plans.

"I don't think there's going to be one big headline item," said another source familiar with the deal.

Since the Sept. 11, 2001, terrorist attacks on the United States, both countries have been bedevilled by the challenges of shielding the continent from another assault without impeding the flow of trade across the vast border, valued at $1.6 billion a day.

Business leaders in both countries have railed against a buildup of red tape they say has undermined one of the world's most lucrative trading relationships.

According to those familiar with the negotiations, the deal will attempt to peel away layers of bureaucracy by introducing measures to improve communications on customs and security issues and streamline procedures in both countries.

This will mean "taking that to a deeper level than we've seen before in terms of the two governments sharing information on common threats," said one source.

"It's about identifying who are the bad people and what is the bad stuff that we want to keep out of North America, and the issue is how to share information to make that happen."

Both countries approach customs issues differently. The type of information that companies must provide to clear customs varies in Canada and the U.S. Therefore, a common set of customs requirements is being viewed as a big step forward.

A "one-stop shopping" window for importers who now have to deal with up to half a dozen government agencies;

Less paperwork for companies that could receive duty-free treatment for shipments but currently don't bother because of the hassle;

Detailed benchmarks that will bring each country's food and auto industries in line;

This will require Canada to make new, potentially expensive investments in screening and security technologies to keep pace with the Americans. The two countries will have to come up with joint plan for future spending.

The deal is not expected to include full-scale harmonization of immigration and refugee policies a possibility that has raised the hackles of critics who fear the deal will cede Canadian sovereignty to the Americans.

The perimeter security arrangement will be styled along the lines of the Canada-U.S. Smart Border Declaration a list of 30 initiatives announced in late 2001 to try to stave off post-9-11 border snarls.

However, the perimeter security pact is different in that it will include built-in structures aimed at ensuring things happen on schedule.

"The goal this time is to have a kind of constant implementation effort," a source said.

While the business community and many frequent travellers will likely welcome the changes, overall expectations are modest.

"I don't think it's going to be a big agreement," said Jayson Myers, president of Canadian Manufacturers and Exporters. "What they are looking at is an action plan on a number of priority items."

The Americans are distracted by deep economic problems at the moment a crisis that will thwart serious efforts at continental integration, said Daniel Drache, a political science professor at York University in Toronto.

"I think it will be quite modest. I don't see at this time any significant changes."

Myers said much can be done to unclog the border through tweaks at the level of customs and regulatory agencies rather than through a "big treaty."

"If we can find better ways of managing risk at the lowest possible cost, those are the things that we've got to be focusing on."

The deal could suffer if Harper and Obama can't find a way to jointly announce it at a public event, Myers added.

"Unless the prime minister and president are involved in this it's not going to be a priority for departments," he said.

"From the U.S. side, too, there's a lot of political capital that's gone into this, and I think (Obama) needs to show he's serious about trade."

"All I'm saying is it's completely nuts to sign a deal when we're getting hit every day of the week from the other side," said Rae. "It just doesn't make sense."