Freeland silent on tanks for Ukraine, but says victory would boost world economy 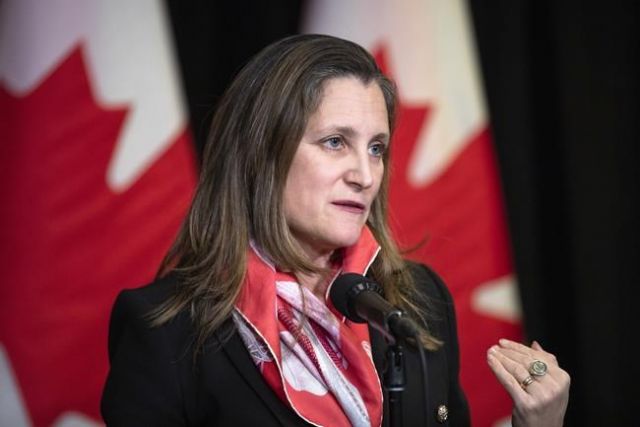 Photo: The Canadian Press
Minister of Finance and Deputy Prime Minister Chrystia Freeland speaks to the media at the Hamilton Convention Centre, in Hamilton, Ont., during the second day of meetings at the Liberal Cabinet retreat, on Tuesday, Jan. 24, 2023. Canada still won't say whether it wants to send tanks to Ukraine, as the U.S. and Germany take steps to bring tanks to the eastern European country. THE CANADIAN PRESS/Nick Iwanyshyn

The United States and Germany are taking steps to send battle tanks to Ukraine, but Canada still will not say whether it plans to make a similar move to help the war-torn country.

The Associated Press reported that U.S. officials say Washington is set to approve sending M1 Abrams tanks to Ukraine to help that country fight back against Russia.

Germany announced it will approve a request from Poland to send Leopard 2 tanks to Ukraine. Berlin requires countries to seek permission to re-export the German-made tanks.

Yet Foreign Affairs Minister Mélanie Joly would not say Tuesday whether the day's developments changed anything for Canada.

"What I can tell you is that we will co-ordinate with our allies," she told reporters in French.

The Canadian Army has 112 Leopard 2 tanks, but some analysts say Ottawa can only give away an inconsequential number without undermining its own training and operational needs.

Finance Minister Chrystia Freeland similarly would not explain why Canada hasn't said how it plans to proceed.

Instead, she noted that Canada is one of the biggest per capita funders of Ukraine's war effort, in part out of economic self-interest.

"That economic battlefield is a very important one," she told reporters on the sideline of a cabinet retreat in Hamilton, Ont.

Conservative defence critic James Bezan said he's supportive of what the Liberals have sent to Ukraine so far, and urged them to consider sending other military equipment that is soon to be replaced.

He said Ottawa should consider sending tanks if that doesn't undermine the country's essential needs, and pointed out that reports to Parliament suggest dozens of Canada's light armoured vehicles are about to be replaced.

"We can be doing more, especially where we have surplus equipment," Bezan said in an interview.

"If we’re going to be sending out any of our tanks, we have to make sure that there are tanks being procured to replace anything that goes out of this country."

Bezan said Canada has already made a significant contribution through gear such as armoured personnel carriers, which move troops around various combat zones.

But he suggested that the Liberals could consider sending the light armoured vehicles, known as LAVs, if they want to keep in lockstep with allies who are sending tanks to Ukraine.

"If we’re going to get the Russian army out of Ukraine, that means that we need more fighting vehicles, and that's where our LAVs become instrumental in helping Ukraine win this battle."

But the Ukrainian Canadian Congress is urging the government to do more.

"Leopard 2 tanks are crucial to the liberation of all Ukrainian land under Russian occupation," the group's president Alexandra Chyczij said in a statement.

"The UCC urges the government of Canada to join the growing coalition of nations supplying Ukraine with Leopard-2 tanks."