Tension as summit to begin 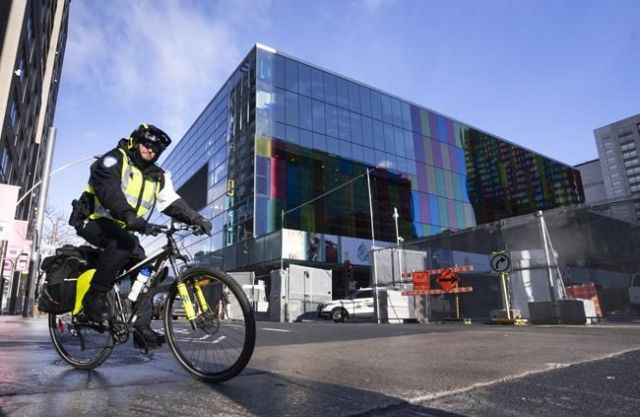 Photo: The Canadian Press
A Police officer cycles around fenced off perimeter of Montreal Convention Centre ahead of the COP15 UN conference.

A major UN conference on biodiversity will get underway in Montreal Tuesday with a lofty goal to get every country to agree to protect almost one-third of the world's land and oceans before the end of this decade.

But the environment may be the easy part of a meeting that is being co-hosted by Canada and China amid growing diplomatic tensions between the two — and without the political heft of world leaders, who weren't invited to attend.

"I would say that it will be very interesting and very important to watch how the COP15 unfolds," said Guy Saint-Jacques, a former Canadian ambassador to China.

China is the president of this year's biodiversity meeting, which means it helps set the agenda and guides the negotiations. It would normally play host, too, and delayed the meeting four times because of COVID-19.

Because China still hasn't opened its borders to international travellers, the Chinese government agreed in June that the meeting could be moved to Montreal, which is home to the offices of the UN biodiversity secretariat.

Officially, Canada's role is mainly one of logistics. But the arrangement will increase Canada's influence over the negotiations and could add more diplomatic unrest to the equation.

To say diplomatic relations between Canada and China are strained is akin to suggesting the Pacific Ocean is just a wee body of water.

The relationship went off the rails in 2018 when Canada arrested a Chinese tech executive on behalf of the United States, and China swiftly detained two Canadians in apparent retaliation. While more than a year has passed since all three were released, tensions haven't really eased.

In recent weeks, new allegations have emerged about Chinese attempts to exert influence within Canada, including in recent elections. And in November, Canada forced some Chinese state-owned companies to sell their stakes in Canadian critical-mineral projects in a bid to tamp down China's dominance in the battery-electric industry.

COP15 will also start just nine days after Canada issued a new Indo-Pacific strategy that seeks stronger trade ties in Asia to counterbalance China's influence. Beijing made clear that it was not happy about the strategy.

Saint-Jacques said China should be grateful that "Canada came to its rescue" when the country couldn't host the biodiversity summit. But he said China has a tendency to push Canada around.

"It's the old proverb that you kill the chicken to scare the monkey," he said. "So they beat Canada up and they tell the other countries that, 'you dare to criticize us, here's what will be happening to you.' So we have to be conscious of that."

Saint-Jacques said China probably won't want Prime Minister Justin Trudeau to attend the conference, since Chinese President Xi Jinping won't be there. Xi would have attended if the summit had taken place on his home turf, and he did give a speech at the virtual event a year ago.

But Trudeau is going, and he's slated to speak at the opening ceremonies along with UN Secretary-General António Guterres.

No other world leaders are expected. China only invited environment ministers, a move some nature groups say is designed to underplay the importance of the meeting.

Environment Minister Steven Guilbeault said it's not typical for nature talks to feature a leaders' summit, and he noted that Canada had only four months to organize this event. He said that inviting leaders was "something we contemplated," but by the time organizers were pondering the idea, it was too late.

"Leaders' schedules around the world were already very packed and we didn't get a super good response to it," he said.

Former Canadian environment minister Catherine McKenna said there is a lot of concern that a deal is less likely to be reached without world leaders being on site to add pressure.

"It's a challenge, because what you want is leaders to come and say we need to get a deal and say that clearly to their negotiators," she said.

"Often negotiators just continue negotiating forever," McKenna said, and a push from the top can be important.

"I don't know how it is going to play out," she said. "I know people are very concerned right now."

She added that there is no doubt the strains between Canada and China will add to the difficulty of getting a deal. But she said they have to set aside the friction because the planet cannot wait.

"There is no solution to the climate crisis, to the biodiversity crisis, without working with China," she said. "And that's challenging. But I think you can work on those issues while still ... standing firm on other issues like human rights and trade."

Both McKenna and Saint-Jacques said Canada and China have had close ties on environmental issues for decades.

Saint-Jacques said Canadian development assistance in China helped lead to the creation of its environment ministry. The two countries have had an environmental framework agreement in place since 1998, and Parks Canada has helped China develop its new network of national parks.

"I would say that if China is honest, they will recognize that Canada has been very helpful," Saint-Jacques said.