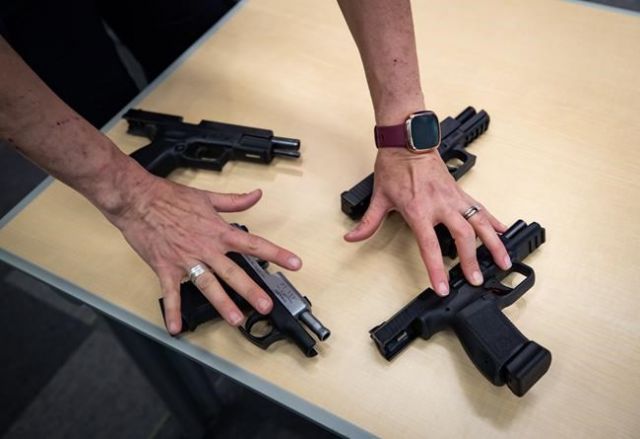 Photo: The Canadian Press
Seized firearms are displayed during an RCMP and Crime Stoppers news conference at RCMP headquarters in Surrey, B.C.

Critics of a planned new measure to remove guns from the wrong hands say it could actually undermine efforts to make people safer.

A government bill being studied by MPs would allow anyone to apply to a judge for an emergency order to prohibit someone who might cause harm, such as a stalker or abuser, from possessing firearms for up to 30 days.

The identity of the person making the application may be kept confidential, and the matter can proceed without the gun owner being present in court.

Several organizations have told the House of Commons public safety committee this "red-flag provision" is misguided and problematic.

Heidi Rathjen, co-ordinator of gun-control group PolySeSouvient, said during a committee hearing that not a single women's organization asked the government for the measure.

Under the current law, a person who fears violence from a gun owner may call police, who can investigate and remove firearms if they conclude there is a risk.

In making a potential victim go to court, Rathjen said, the red-flag proposal could allow police to offload their responsibility.

"We feel that the existence of such a measure will undermine the reforms that need to take place, in those kinds of cases where police don't take complaints seriously enough," she said. "And that should be the focus of improving the system, because that is the most effective system in terms of protecting victims and potential victims, especially with domestic abuse."

PolySeSouvient includes students and graduates of École polytechnique in Montreal, where a man gunned down 14 women in 1989.

In a written submission to the committee, the group says the introduction of new red-flag procedures for victims also shows a lack of understanding of the nuances of intimate abuse.

"Indeed, it is unrealistic to expect victims to have the means and the fortitude to go to court while they face the simultaneous challenges of escaping abuse, caring for children and keeping their jobs."

In its brief to the committee, the National Association of Women and the Law says the court application process "is likely to be risky and impractical for women whose safety is at risk."

The association wants MPs to strengthen the law throughout to ensure swift removal of guns from an owner when a risk of harm is evident.

"Acting extremely quickly can be essential to preventing a femicide. Too many steps or confusion regarding who removes the guns and when can have tragic consequences."

Louise Riendeau of the Regroupement des maisons pour femmes victimes de violence conjugale told the Commons committee the red-flag measure should be removed from the bill because it might harm more women than it would help.

The existing law is both "sufficient and preferable to the proposed changes" of the red-flag provision, the Canadian Bar Association says in a brief to the MPs.

The association suggests that allowing the identity of the person who goes to court to remain sealed could lead to abuse by a vengeful individual.

"Police officers themselves are vulnerable to false complaints under these provisions," the association says. "An aggrieved individual, who was arrested, can present a one-sided account of the interaction in court. There is no cross-examination or any ability to check records."