'No idea too crazy': Cabinet given suite of options before invoking Emergencies Act

'No idea too crazy' 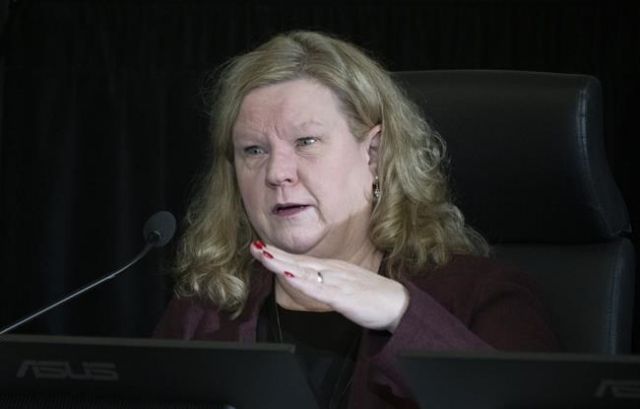 Cabinet ministers did not exhaust every option they had to resolve the protests blockading Ottawa streets and border crossings across the country last winter before turning to the Emergencies Act, a federal inquiry heard Friday.

Thousands of protesters rolled into Ottawa in big rigs and other vehicles to voice their opposition to COVID-19 public health restrictions and the Liberal government.

After the first weekend, it became clear the protesters did not plan to leave downtown Ottawa, where they set up camps in the middle of city streets. That's when cabinet convened to review what the federal government could do to end the protests, said Jacqueline Bogden, the government's deputy secretary on emergency preparedness.

"It wasn't perfect, but it was there to kind of stimulate conversation on the range of options within federal jurisdiction of things that ministers and departments might be able to think about," Bogden said Friday.

Bogden testified at a hearing of the Public Order Emergency Commission, which is scrutinizing the events and advice that led to the Liberals' mid-February decision to invoke the Emergencies Act. Prime Minister Justin Trudeau declared a public order emergency under the legislation on Feb. 14, the first time it was invoked since it replaced the War Measures Act in 1988.

The act is meant to be used when an urgent, critical and temporary situation threatens the lives, health or safety of Canadians, the provinces are thought to lack the capacity or authority to respond and the crisis cannot be handled effectively with existing laws.

Among the options for cabinet ministers was a "national listening exercise," like the French government undertook during the 2019 yellow vest protests in that country, though the response to those demonstrations also included violent police action.

Stiffer penalties were also considered, such as banning trucks and trucking companies taking part in the "Freedom Convoy" from being awarded government contracts.

When protests had not ended by Feb. 9, the clerk of the Privy Council, Janice Charette, asked deputy ministers to come up with more options.

"We have to leave no stone unturned. We have to make sure that we are looking at every power, duty, every authority we have, every resource we have to make sure we are bringing the full power of the federal government," Charette said of her orders to deputies during her testimony Friday.

"I would have been saying 'all hands on deck, no idea too crazy, let's look at absolutely everything.'"

The Emergencies Act was listed as a potential "plan B" on the final list of options that was considered by cabinet ministers the following day.

Federal officials were thinking about the legislation for years at that point, because there was discussion about the possibility of invoking it due to the COVID-19 pandemic, deputy clerk Nathalie Drouin told the commission Friday.

It wasn't until Feb. 9 that deputy ministers started considering using it in the context of the protest.

When such a serious option was brought to the table, Charette recommended ministers move the discussions to an incident response group of cabinet ministers with decision-making powers.

Minutes from a Feb. 12 meeting of that group show there were two lists of options consideration: one using the existing authorities, and a second that would involve granting new powers to the government and police.

Charette said not every existing option was exhausted before cabinet decided to move ahead with the Emergencies Act.

"But the question was whether or not (the other options) were going to be adequate to be able to deal with the totality of this situation. That, I think, was the matter before ministers," she said.

The memo of approval signed by the prime minister to invoke the Emergencies Act, prepared by Charette, cautioned that while the Privy Council's office felt the circumstances of the protests met the threshold to invoke the law, that view was "vulnerable to challenge" because the law had not been tested.

The legislation relies on a definition of threats to the security of Canada as found the Canadian Security Intelligence Service Act, which includes espionage or sabotage, foreign influence, the threat of serious violence, or the violent overthrow of government.

The inquiry has heard that CSIS director David Vigneault advised cabinet there was no such threat to the security of Canada under that definition, but Charette said Friday that wasn't his call to make: the decision was up to cabinet.

She advised the prime minister the threshold was met because of a culmination of factors, including violent rhetoric, hate speech, death threats to elected officials and the cache of weapons founds at the Coutts, Alta., border blockade.

"This wasn't a single-headed hydra," she said, adding the protests were organized, co-ordinated and very well financed.

The memo of approval was supposed to include a threat assessment, but it wasn't included by the time the prime minister signed the document and doesn't appear to have materialized since, Charette said.

The Canadian Civil Liberties Association issued a statement Friday to express how "profoundly disturbing" it was to learn the government did not abide by the strict definition of an emergency in the legislation.

"National emergencies that authorize extraordinary powers cannot be in the eye of the beholder," Cara Zwibel, a director with the CCLA, said in a written statement Friday.

The commission will hear from the director of the Canadian Security Intelligence Service and seven federal ministers during its final week of testimony.

The prime minister's chief of staff, deputy chief of staff and director of policy were recently added to the list of witnesses for next week.

Trudeau is expected to be the commission's final witness next Friday.