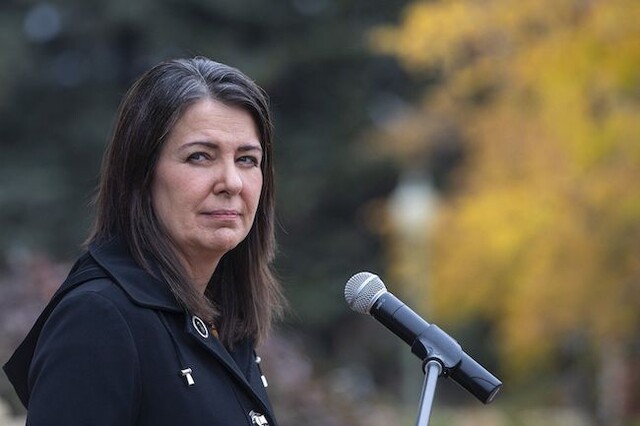 Photo: The Canadian Press
Alberta Premier Danielle Smith speaks at a press conference, in Edmonton, on Monday, Oct. 24, 2022. The Alberta government has, for the second time in a decade, fired the governing board of its health service and replaced it with an administrator. Smith says Dr. John Cowell will take over the duties of the Alberta Health Services board immediately.

The Alberta government has, for the second time in a decade, fired the governing board of its health service and replaced it with an administrator.

Premier Danielle Smith said Dr. John Cowell will take over the duties of the Alberta Health Services board effective immediately.

“The system is in crisis. We know it,” Cowell told a news conference in Calgary Thursday alongside Smith and Health Minister Jason Copping.

“I’m grateful to be back in a position to do something about it.”

"We know what needs to be done. We just now need the will to do it," said Smith. "People will judge us based on the outcome."

Copping said having one full-time administrator working with AHS interim president Mauro Chies will provide for quicker, more nimble decision-making than a board of part-time governors. He said the board will come back "at the appropriate time."

Opposition NDP Leader Rachel Notley said the decision just adds more confusion and upheaval to the system at the expense of dealing with emerging problems, particularly overcrowding of children’s hospitals due to a surge in viral respiratory illnesses.

“The dismissal of the AHS board today is nothing more than bad political theatre,” said Notley.

The move affects 11 members of the board. One member, Deborah Apps, quit the day after Smith was elected United Conservative Party leader and premier in early October, saying she feared Smith’s plan would further destabilize a fragile system.

Smith has been promising for months to fire the board.

She blames the senior ranks of Alberta Health Services for failing to provide the needed care during the COVID-19 pandemic, pushing hospitals to the brink during multiple waves and, in Smith’s view, forcing the province to implement extreme measures — like vaccine passports — that she termed an intolerable intrusion on personal freedom.

She also criticized AHS for directing staff to be vaccinated in order to work.

This is Cowell’s second go-round as the top administrator for AHS. He was brought in for a one-year term after former Progressive Conservative health minister Fred Horne fired the board in 2013 because it rebuffed his demand to rescind $3.2 million in pending bonus payments to executives.

Cowell, also the former head of the health watchdog Alberta Health Quality Council, was given a mandate at that time to streamline management and find savings. Horne later credited him for reducing the number of vice-presidents from 80 to 10 while tightening expenses and bonuses.

The AHS change is part of Smith's multipronged plan reform to health care, starting with no restrictions or mandates for future COVID-19 outbreaks.

She has been sharply critical of AHS and Dr. Deena Hinshaw, the former chief medical officer of health, for imposing gathering restrictions along with business and school shutdowns she says caused loneliness, isolation, and joblessness with consequent long-term impacts on mental health, domestic violence and drug abuse.

Earlier this week, Smith announced Hinshaw was out as top doctor, replacing her with current AHS vice-president Dr. Mark Joffe, who will do both jobs.

In April, AHS announced the departure of CEO and president Dr. Verna Yiu, replaced by Chies.

Smith has tasked Copping with changing the system with an eye to decentralization.

Alberta’s health system has been expanding and contracting for almost 30 years.

Consolidation began in 1994 when Alberta reduced 200 local boards to 17. That 17 was reduced to nine a decade later. In 2008, the province created the current centralized Alberta Health Services. Three years after that, it decentralized services into five administrative regions.

Former premier Jason Kenney has lauded the centralized AHS model as helping the province make quick decisions and to bulk-buy supplies during the COVID-19 crisis.

He blamed AHS for giving faulty advice on bed capacity numbers that hamstrung his government at crucial decision-making moments during the pandemic.

After the board was fired in 2013, AHS was run by a single administrator for two years until the NDP government reconstituted the panel in late 2015.