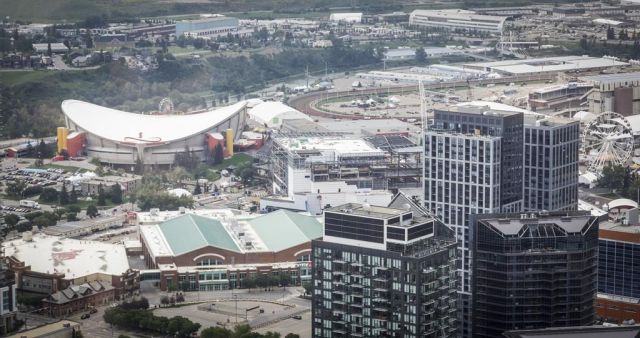 CALGARY — Alberta's premier has stated her support for a new arena in Calgary to house the NHL's Flames and wants the province to get involved.

Danielle Smith said in a statement Tuesday that the 39-year-old Saddledome has served the community well, but can no longer compete with new buildings across North America for events, concerts and sports

"One need only look north to Rogers Place to see the host of world-class events being attracted to Edmonton along with the ongoing economic revitalization that facility has brought to its downtown core," Smith wrote.

"Simply stated, Calgary needs a new world class event centre and arena, and the time to commence with this project is now."

Calgary Sports and Entertainment Corporation (CSEC) and the city have restarted talks on a new event centre after a previous agreement collapsed last year.

The province didn't contribute any money to the construction of Edmonton's Rogers Place that opened in 2016, nor has it committed any dollars to Calgary's new building.

Smith wants to find ways the province could help the city and the Flames complete the project.

"I've asked him to reach out to both the city and CSEC on how the province can be helpful in this regard," Smith said.

"As someone who has lived most of my life in Calgary, I know the Flames are an integral part of the fabric of the city, not to mention a critical direct and indirect economic driver and job creator for the community."

The initial estimate for Calgary's event centre was $550 million split between the two parties, but that figure increased to $634 million.

Shovels were scheduled to hit the ground this year for a 19,000-seat hockey arena and concert venue, but the Flames withdrew because of rising costs.

Calgary city council voted in January to recruit a third party to get the project back on track.

Commercial real estate moguls John Fisher, Guy Huntingford and Phil Swift were tasked with determining whether the Flames still wanted to partner on an arena, or if the city should look for other potential partners.

The work concluded with the Flames agreeing to re-enter arena talks with the city.

The city will be represented in negotiations by CAA ICON, which has managed the development of other arenas and stadiums, including Rogers Place.

Edmonton's new arena cost $483.5 million to build, but the add-ons of a pedestrian corridor and transit connection, a community arena and a convention space called the Winter Garden brought the total cost of the project to $613 million.

The Saddledome is the second-oldest arena in the NHL behind New York's Madison Square Garden.

The proposed event centre on a parcel of land north of the Saddledome is envisioned as the heart of a larger revitalized commercial and residential district on the downtown's east side near the Stampede grounds.

Just weeks after the Flames and the city agreed to an amended deal in July, 2021, it fell apart when the city added an additional $19 million in roadwork and climate mitigation to the project, and wanted the Flames to pay for $10 million of that.

CSEC president and CEO John Bean said then that not only would CSEC's share be $346.5 million compared to the city's $287.5 million, but the Flames bore the risk of any more rising costs.

After relocating from Stockton, Calif., for this season, the Wranglers joined the Flames, Hitmen and Roughnecks in playing home games out of the Saddledome this season.

This report by The Canadian Press was first published Oct. 25, 2022.