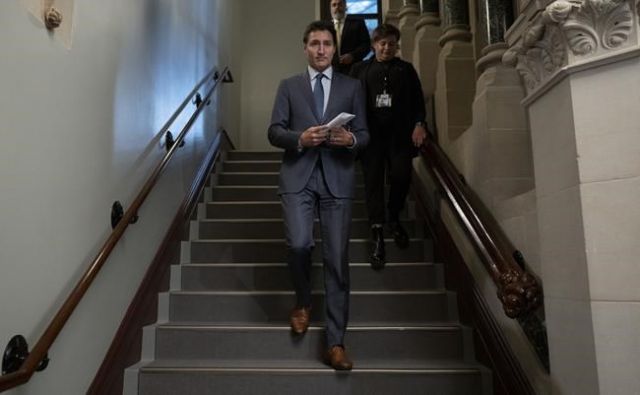 Photo: The Canadian Press
Prime Minister Justin Trudeau makes his way to caucus on Parliament Hill on Wednesday, October 5, 2022 in Ottawa. Trudeau says it is clear that Hockey Canada executives just don't get the seriousness of the situation the organization is facing. THE CANADIAN PRESS/Adrian Wyld

Prime Minister Justin Trudeau says it is clear Hockey Canada executives just don't get the seriousness of the situation facing the organization.

Trudeau says it "boggles the mind" that past and present board chairs are digging in their heels about replacing the entire leadership team at the sport's governing body.

His comments come a day after interim board chair Andrea Skinner told a House of Commons committee that hockey is being made a "scapegoat" for the toxic culture that exists across society, including in politics.

She says the board does not believe the senior leadership at Hockey Canada should be replaced because that risks destabilizing all hockey programs across the country.

Trudeau and Sport Minister Pascale St-Onge have both called for Hockey Canada executives to step down after it was revealed the organization has paid out $7.6 million to settle nine sexual assault and abuse claims since 1989.

The organization is facing accusations it covered up criminal behaviour and used player fees from recreational programs to create trust funds to cover claims from sexual abuse lawsuits.