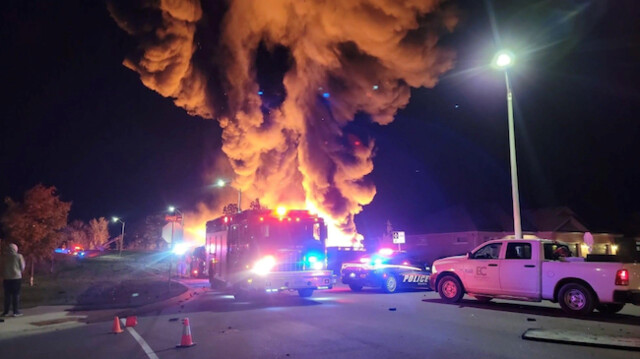 Residents evacuated from their homes due to a "massive" industrial fire in Belleville, Ont., overnight returned Monday afternoon to find their houses covered in ash and charred plastic foam, fire officials said as debris was seen as far as the other side of the city.

About 150 homes were evacuated after roofing materials, including rubber membrane and Styrofoam insulation, caught fire in an open-air industrial area in the city’s east end on Sunday around 11 p.m., Deputy Fire Chief Dan Smith said.

Smoke rushed into the night sky, sending "massive chunks of burning Styrofoam floating into the air," with fiery metre-long pieces landing on cars, homes and in backyards, he said.

"I've never seen anything quite like this in my career," Smith, a firefighter for 20 years, said of the large industrial blaze.

The fire covered an area around the size of a department store, Smith said. Debris, he said, was found nearly nine kilometres away in an intersection on the other side of the city.

Smith recalled what he saw, standing on a hill near the fire, when he looked out over a residential neighbourhood to the south.

Evacuees took shelter at a nearby recreation centre as the entire local fire department – two full-time and two volunteer stations – battled the towering blaze with support from nearby Quinte West, Mohawks of the Bay of Quinte First Nation and CFB Trenton.

Firefighter teams canvassed nearby areas searching for any knock-on fires from the burning debris, Smith said.

No injuries were reported and the office of Ontario’s fire marshal is investigating the cause of the fire, Smith said.

The city said an assessment by the province’s Ministry of Environment, Conservation and Parks conducted Monday found no danger to the public.

Once the assessment was done and the fire was out, residents were cleared to return to their homes around noon, Smith said.

The city said crews were out cleaning streets and sidewalks Monday.