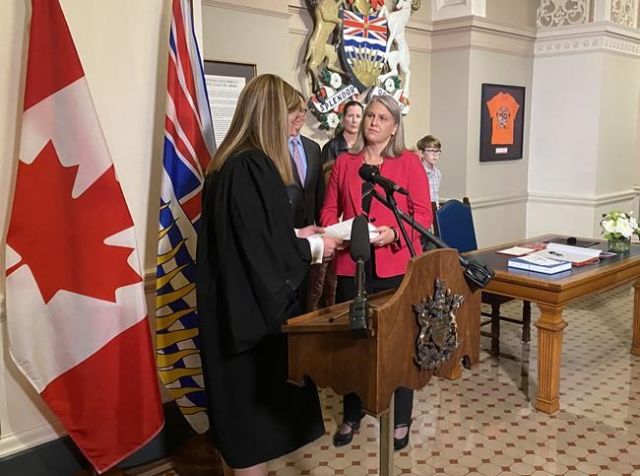 Photo: The Canadian Press
The newest member of the British Columbia legislature, Elenore Sturko (right), elected last month in Surrey South byelection, is sworn in by clerk Kate Ryan-Lord at the legislature in Victoria, Monday, Oct.3, 2022. The clerk says Sturko is the first politician pledging allegiance to King Charles. THE CANADIAN PRESS/Dirk Meissner

Politicians at British Columbia’s legislature are celebrating the first pledge to the King for a newly elected member and are recognizing what’s expected to be the last session as premier for John Horgan.

The seven-week fall sitting started today with the swearing-in of Liberal Elenore Sturko, who was elected last month in the Surrey South byelection.

Legislature clerk Kate Ryan-Lloyd told those gathered for the swearing-in ceremony that Sturko is the first elected official in Canada to pledge allegiance to King Charles since the recent death of the queen.

Horgan announced last June that because of health reasons he would leave his post as premier in December when the New Democrats choose a new party leader, and he would not run in the next provincial election expected in October 2024.

The session starts as the New Democrat government faces criticism for health-care issues, including emergency care in rural communities and a shortage of family doctors.