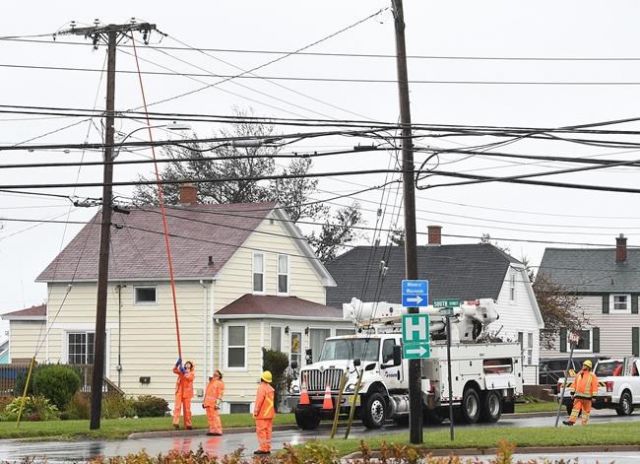 Photo: The Canadian Press
Crews from Nova Scotia Power work on reconnecting the power grid to the Glace Bay Hospital knocked out by Hurricane Fiona, in Glace Bay, N.S., Monday, Sept. 26, 2022. The premier of Nova Scotia has issued a stinging rebuke to the telecommunications companies that serve the province, saying too many Nova Scotians are still without cellphone service, four days after post-tropical storm Fiona roared across Atlantic Canada. THE CANADIAN PRESS/Vaughan Merchant

The premier of Nova Scotia has issued a stinging rebuke to the telecommunications companies that serve the province, saying too many residents are still without cellphone service four days after post-tropical storm Fiona roared across Atlantic Canada.

It's unacceptable that there are Nova Scotians who still can't call 911 or connect with loved ones, Tim Houston said Wednesday in a statement.

"Nova Scotians have questions about when their service will be restored, how widespread the outages are and what the companies plan to do to ensure this never happens again," he said. "There is no question we need our telecommunications companies to step up and be more transparent."

The premier said the government had asked Bell Aliant, Eastlink, Rogers and Telus to send representatives to the province's emergency co-ordination centre before Fiona's arrival, but he said none of the companies was initially willing to co-operate.

"Eastlink, Rogers and Telus declined to attend the (co-ordination centre) in person during the initial response," the premier said.

Bell Aliant, however, eventually sent someone after the province complained to the company's senior management, but the premier said the representative left after two days to work virtually.

The company issued a statement saying its representative had to move off site Sunday because they had to make their own property safe, but Bell Aliant said they remained connected to the centre. "Both 911 and our emergency responder network also remained fully functional throughout the storm and aftermath," spokeswoman Katie Hatfield said.

"We have also had a representative take part in every (Emergency Management Office) media availability … and are committed to keeping customers updated through the media, our social media channels, websites, call centres and stores."

At the height of the storm, the majority of Bell Aliant's wireless and wireline networks were operational and "at this point are close to being back to 100 per cent," Hatfield said.

"Other service providers have come together in an effort to make sure Nova Scotians have the information they need, yet the telecommunications companies are consistently missing from the table," Houston said.

"We are calling on the federal government, as the regulator, to ensure that telecommunications are accountable for their performance in emergencies and transparent with customers."

A spokesperson for Rogers issued a statement saying the company worked closely with the provincial and federal governments before and after the storm hit.

"As impacted areas were cleared from downed lines or trees, our local teams were able to restore services as quickly as possible," the statement said. "We now have 99 per cent of services restored across the region."

As of Wednesday morning, more than 104,000 homes and businesses in Nova Scotia were still without electricity, which represents 20 per cent of Nova Scotia Power's customers. The outages, which started early Saturday, have had an impact on cellphone service because the backup batteries in cellphone towers are dying.

The statement from Rogers said the company brought in technicians from Ontario and Quebec, remained in constant contact with all provincial emergency management teams and deployed generators to cell towers to keep batteries charged.

"Our systems … automatically shifted calls across the network to minimize wireless impacts as much as possible," the statement said. "With downed trees and poor road conditions, our crews are deploying as quickly as possible once safe to do so."

Poor cellphone service has also been reported in P.E.I. and southwestern Newfoundland, areas thrashed by Fiona with massive storm surges and hurricane-force winds.

In Ottawa, Infrastructure Minister Dominic LeBlanc said the federal government has been working with industry to build redundancy into Canada's telecommunications services.

"The more common-sense things like backup generators that would provide at towers or other essential parts of the telecommunications infrastructure that redundancy, the better we're all going to be," LeBlanc told a ministers briefing.

"So the government of Canada accepts that we have a responsibility with that telecommunication sector to ensure that we're doing more, and we're doing it quickly. "

LeBlanc said the government won't hesitate to consider regulatory measures if it concludes that industry isn't doing its part.

Immigration Minister Sean Fraser, whose riding of Central Nova was among the areas hit by Fiona, described the lack of cellphone and internet services as a public safety concern. "We have to examine (it), both from a regulatory point of view and what kind of support we can establish to strengthen the telecommunications networks," he said.

Meanwhile, Prime Minister Justin Trudeau met Wednesday with shell-shocked residents of Port aux Basques, N.L., where Fiona destroyed about 100 homes, dragging some of them out to sea amid a record-breaking storm surge.

In nearby Burnt Islands, N.L., which was also hammered by the storm, there was no cellphone service until Wednesday.

On Wednesday, Newfoundland and Labrador Premier Andrew Furey acknowledged there wasn't internet and phone service in some communities. And the area's provincial legislator, Andrew Parsons, confirmed there was no service in the remote community of La Poile, which is along the province's south coast and accessible only by ferry.

On Tuesday, NDP Leader Jagmeet Singh told the House of Commons that cell service across Atlantic Canada had been disrupted because the telecom companies had failed to build infrastructure capable of coping with extreme weather. During question period, he asked the Liberal government to force the companies to improve their infrastructure.

Deputy Prime Minister Chrystia Freeland said the Liberal government was "working hard with cellphone companies to ensure they give Canadians the service they need .... (We) are doing everything we can to ensure that everyone affected by the storm has what they need."