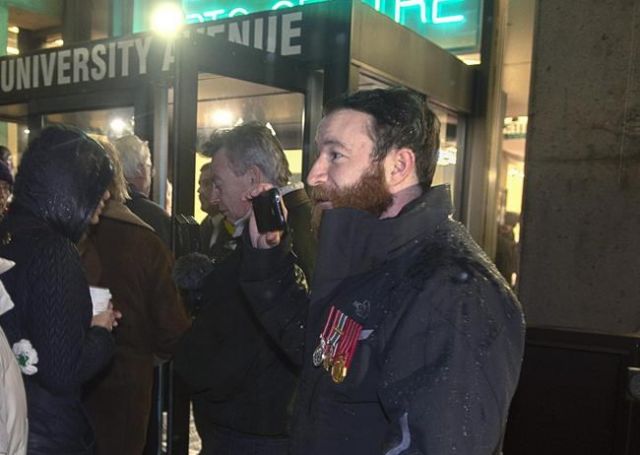 Photo: The Canadian Press
Jeremy MacKenzie, right, a Canadian military veteran who served in Afghanistan, talks with an unidentified woman outside the venue where Omar Khadr, the former child soldier is speaking in Halifax on Monday, Feb. 10, 2020. Conservative Party Leader Pierre Poilievre says he has referred comments made about his wife by MacKenzie, a popular, far-right streamer, to the RCMP.  THE CANADIAN PRESS/Andrew Vaughan

Conservative Leader Pierre Poilievre says he has asked the RCMP to look into "disgusting" comments made by the founder of a far-right group about sexually assaulting his wife.

Jeremy MacKenzie was referring to Anaida Poilievre on an online video stream over the weekend when he suggested she be sexually assaulted.

MacKenzie, 36, is the high-profile founder of the online group "Diagolon," which shares members and affiliation with the "Freedom Convoy," as well as those opposed to government-mandated health restrictions.

He is facing assault and firearms charges in Saskatchewan and his native Nova Scotia related to separate incidents.

Poilievre, who was previously photographed shaking MacKenzie's hand at a Conservative leadership campaign event in Nova Scotia, called MacKenzie and the other man in the video "dirtbags" and "losers" and said he will not tolerate people threatening his family.

In an interview with The Canadian Press, MacKenzie says he was drinking when he made the comments and nobody meant any harm by it.