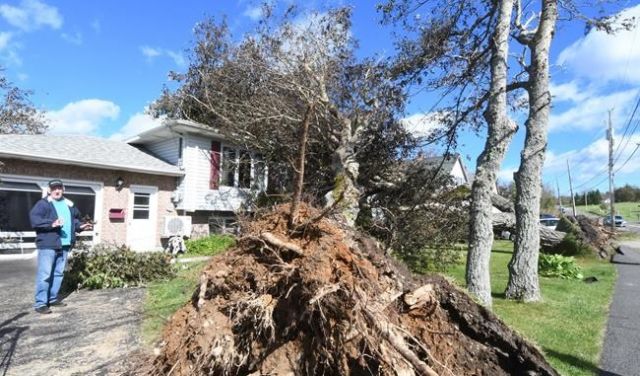 Residents of Atlantic Canada and eastern Quebec are coming to terms with the full scope of the damage left behind after post-tropical storm Fiona tore through the region over the weekend as one of the strongest storms Canada's East Coast has ever faced.

Members of the Canadian Armed Forces are being deployed to help with recovery efforts, with federal Defence Minister Anita Anand saying Sunday that about 100 troops a piece were either in place or en route to Newfoundland, Nova Scotia and P.E.I. to provide assistance with the cleanup effort.

Emergency Preparedness Minister Bill Blair said the immediate need is to provide food and shelter for those displaced by the storm, which is why the federal government is matching donations to the Canadian Red Cross.

However, he added that Ottawa will work with provinces to determine what is needed for recovery from a financial perspective, especially for Canadians who have lost everything. He said the first priority is the restoration of power and utilities, as well as clearing roadways to get essential supplies to those who need them.

At Fiona's peak on Saturday, more than 500,000 customers across Atlantic Canada were without power, but by early Monday morning that number had been lowered to less than 300,000, with the vast majority in Nova Scotia. But even as crews workaround the clock to repair downed lines, some utility companies warned it could be days before the power is back on for everyone.

Authorities in western Newfoundland confirmed Fiona's first Canadian fatality on Sunday. RCMP said a 73-year-old woman's body was recovered from the water more than 24 hours after a massive wave struck her home, tearing away part of the basement. Her name was not immediately released.

The cause of death of a second person on P.E.I. has yet to be determined, but the Island's acting director of public safety told a news conference that preliminary findings pointed towards "generator use.'' No further details were provided.