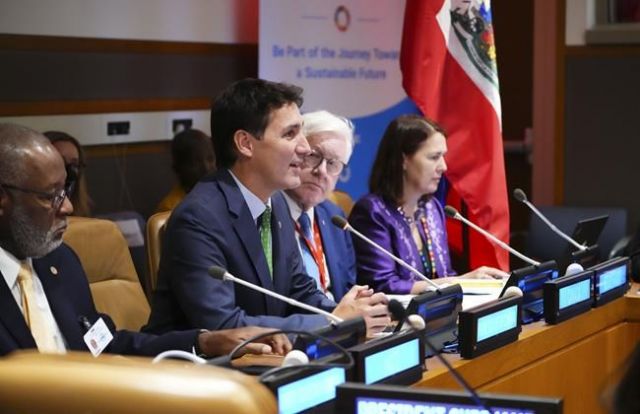 Photo: The Canadian Press
Prime Minister Justin Trudeau speaks during a meeting of the Ad Hoc Advisory Group and Caribbean partners on the situation in Haiti at the United Nations in New York on Wednesday, Sept. 21, 2022.

Trudeau is in New York to take part in the United Nations General Assembly, where Ukraine's seven-month fight against the aggressions of Russia has been a dominant theme of talks.

Earlier today, Ukrainian President Volodymyr Zelenskyy addressed the global gathering by video, when he insisted his country would prevail in repelling Russia's attack and forcing its troops out.

That was just hours after Putin announced he would mobilize some reservists in what is the largest military conflict in Europe since the Second World War.

Zelenskyy says that decision suggests Putin is not serious about negotiating an end to the conflict.

In Ottawa, Deputy Prime Minister Chrystia Freeland says Russia's invasion could be at a "turning point" and that now was the time to "double down on our support" for Ukraine.