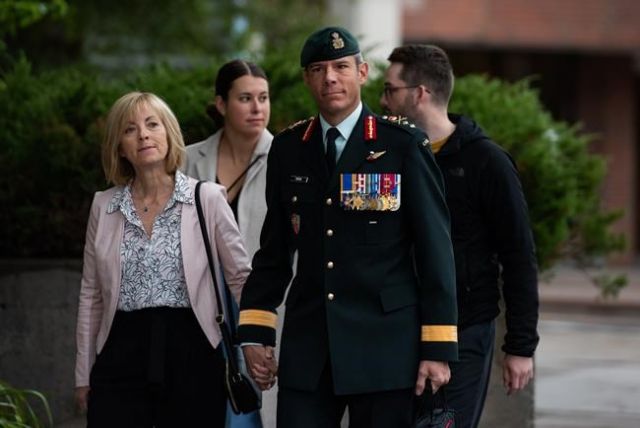 Photo: The Canadian Press
Maj.-Gen. Dany Fortin, right, arrives with his wife Madeleine Collin as he arrives at a Gatineau, Que. courthouse ahead of the second day of his trial on Tuesday, Sept. 20, 2022. THE CANADIAN PRESS/Spencer Colby

Maj.-Gen. Dany Fortin says he is not guilty of sexual assault and never had any physical contact with a woman who made detailed allegations against him in court this week.

Fortin told the court this afternoon that he was shocked and devastated to learn of the allegations.

He was removed as head of Canada's COVID-19 vaccine rollout in March 2021 and charged with one count of sexual assault three months later.

She told the court she opened her eye and recognized Fortin, whom she said she believes "without a doubt" was her attacker, then pushed him away and told him to get off her before he backed away.

The complainant's ex-boyfriend, who was called as a witness by the defence today, said he had no memory of a conversation she said she had with him immediately after the encounter.