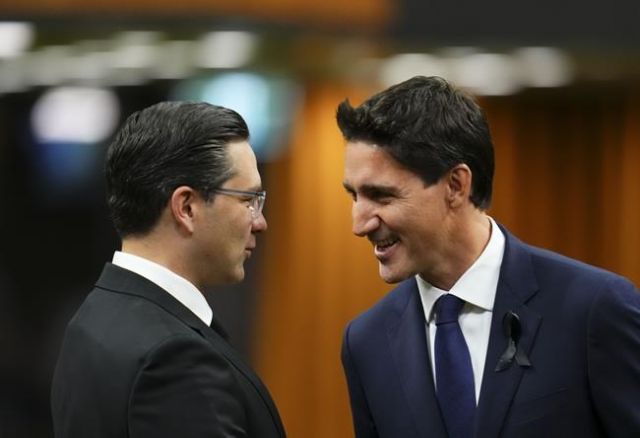 A new poll suggests a plurality of Canadians still believe Justin Trudeau is still the best man for the job of prime minister, but he has only a slight lead over new Conservative Leader Pierre Poilievre.

Leger has released the findings of an online survey conducted over the weekend with around 1,500 respondents.

The results suggest the Liberals' popularity has declined since one year ago, when Trudeau was re-elected for a second time to form a minority government.

Around 28 per cent of respondents said they would cast a ballot for the Liberals if an election were held today, as compared to the nearly 33 per cent who said the same last September.

And the results suggest some of the former Liberal voters are shifting left and right.

About 34 per cent of respondents said they would park their vote with the Tories, an increase from the 26 per cent of voters who favoured the Conservatives after last year's election.

Another 23 per cent of respondents said they would pick the NDP, an increase from the nearly 18 per cent recorded in the election.

Three per cent of respondents opted for the Green Party and another three per cent would choose the People's Party of Canada.

When it comes to who would make the best prime minister, however, the data suggests Trudeau has the edge over both Poilievre and the NDP's Jagmeet Singh.

Trudeau was top choice for 24 per cent of respondents, which was three points ahead of Poilievre and seven points over Singh.

The new poll comes 10 days after Poilievre was elected to lead the Tories in a landslide win, which many in the party hope signals the beginning of a unified Conservative party.

It cannot be assigned a margin of error because online polls are not considered truly random samples.

The data suggests Ontario is a much closer toss-up, with 34 per cent of respondents in that province saying they would pick a Poilievre-led Conservative party as compared to 32 per cent who said they would choose the Trudeau Liberals.