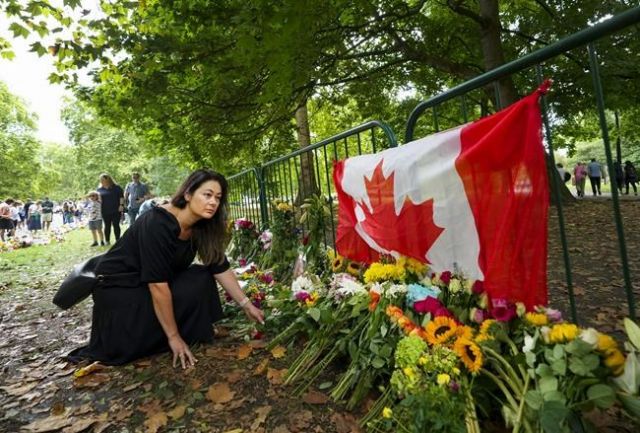 A pink papier maché flamingo, a marmalade sandwich and a Queen-shaped rubber duck are among the items being left among the cards and flowers at a tribute site to the late Queen Elizabeth II in London.

Palace officials have restricted access to the gates of Buckingham Palace, instead asking mourners to bring their cards and flowers to a dedicated site at nearby Green Park.

On Sunday, hundreds of people at a time could be seen passing through the gates of the floral tribute garden to add their bouquets and cards to the growing piles criss-crossing the site. Some people, however, left more than flowers.

A number of people had left cards and stuffed animals featuring the children's book character Paddington Bear. One person even placed a labeled marmalade sandwich in a ziploc bag alongside the toy, in a nod to a video the queen filmed with Paddington earlier this year.

In that video, which was released around the time of the Platinum Jubilee in June, the queen and the bear share a chaotic tea and discuss their mutual love of marmalade sandwiches

Mother-daughter pair Lorraine and Angela Payne, from the West Midlands town of Nuneaton, chose a Paddington Bear card in honour of the video, which they said showed off the queen's personality and humour.

"It was so poignant and such a lovely thing to happen," said Lorraine Payne, as she and her daughter hung their card on a tree.

Many of the flowers were accompanied by children's drawings, long letters and heartfelt notes of thanks. The Paynes said theirs was a simple message to thank the queen "for her service to England and the Commonwealth and the world."

Corgi dogs and horses — two of the queen's loves — were popular themes among the gifts, as were hand-drawn, painted and even crocheted likenesses of the late monarch herself. Other items, including a black-and-white baseball cap, the flamingo and a red paper lantern, had a less clear connection to the royal family.

Canadians Kersten and Charlie Samolczyk, who are originally from Toronto, were drawn to one of several large Canadian flags that had been left at the site.

The couple, who came to lay a bouquet with their two children, said the scene at the park was "incredible and a little bit overwhelming."

"The sheer volume of people and flowers, you can’t help but be emotional," Charlie Samolczyk said.

Like many at the site, the couple based in the British county of Surrey feel a personal connection to the Royal family. They got to see the Queen up close at a horse racing event a few years ago and once attended at a garden party with King Charles III back when he was Prince of Wales. At the time, Kersten Samolczyk was struck by "how friendly he was with everyone and how engaged in his conversations."

The organization managing the park is trying to crack down on the type of gifts left at the site.

"In the interest of sustainability, we ask visitors to only lay organic and compostable material," Royal Parks wrote on its website.

Workers were at the entrance gates with scissors on Sunday, helping people remove the plastic wrapping from their bouquets before they entered.

A black and white sign inside the gate warned that gifts and other tokens could not be left at the site.

But the presence of items like a rubber duck shaped like Queen Elizabeth, a union-jack shaped corgi lawn ornament and a purple velvet sombrero suggested that message may have been too little, too late.

Royal Parks said flowers left at the site will eventually be processed and composted for use in the gardens, while cards will be removed and stored offsite.