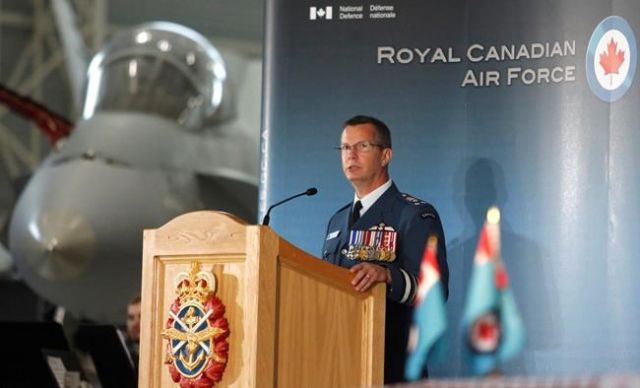 The Royal Canadian Air Force is delaying plans to install a new commander at one of the country's two CF-18 fighter jet bases due to a military police investigation.

A ceremony was planned for Tuesday to install Col. Colin Marks as commander of 3 Wing in Bagotville, Que.

But those plans are now on hold as police investigate an alleged incident at Canada's other main CF-18 base, 4 Wing in Cold Lake, Alta., more than two months ago.

Air Force commander Lt.-Gen. Eric Kenny announced the delay on Monday, saying investigators are looking into comments allegedly made during a meeting designed to choose call-signs, or nicknames, for fighter pilots.

“On June 22, at 4 Wing Cold Lake, a call-sign review board, where call-signs are assigned to members associated with the fighter community, took place in a small group social setting," Kenny said in a statement.

"An investigation was launched into statements made during this activity and remains ongoing. The investigation will examine actions of those involved during the call-sign review board."

While Kenny did not provide further details, the Defence Department in a followup email said multiple people were at the meeting.

Neither Kenny nor the department would provide further details, citing a need to protect the integrity of the investigation.

Fighter pilots and weapons officers flying on fighter jets are typically assigned call-signs at unit social gatherings where members share stories and anecdotes about each other, according to the Defence Department.

"Possible call signs are suggested by peers and voted on by the group," it added. "Attributing call-signs to members, particularly within the fighter and air weapons controller communities is a tradition meant to foster esprit de corps."

The Canadian Armed Forces has continued to deal with the fallout from a rash of inappropriate — and in some cases criminal — behaviour by senior officers.

The commanders of two naval frigates were relieved of their commands in June, though officials have said neither was related to allegations of sexual misconduct.