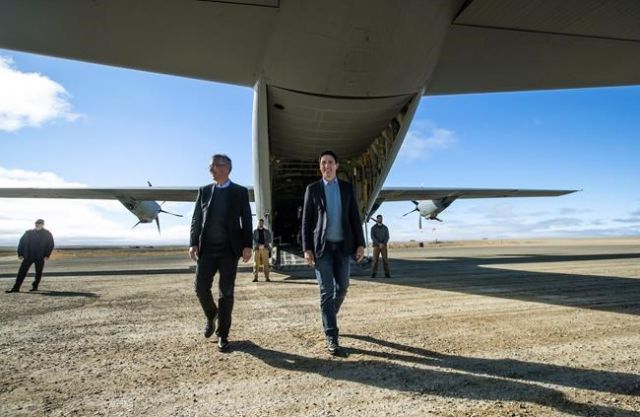 Prime Minister Justin Trudeau arrived in the remote northern community of Cambridge Bay on Thursday to attend the Canadian military’s largest Arctic training exercise, in what many see as a clear signal that defending Canada's North is now a top priority for his government.

Landing under a sunny early afternoon sky and accompanied by NATO Secretary-General Jens Stoltenberg, Trudeau set out for a military radar station before heading out to watch Operation Nanook.

The visit marks the first time Trudeau has attended Operation Nanook, which has been held every year since 2007 and involves military aircraft and warships as well as hundreds of Armed Forces members training in Canada’s austere Arctic environment.

The exercise was a staple of Stephen Harper’s traditional visits to the Arctic when he was prime minister, during which time the Conservative government launched numerous initiatives aimed at bolstering Canada’s military capabilities in the region.

Trudeau broke that tradition in August 2016 after taking over as prime minister the previous fall, opting instead to travel to China as his government started to shift Ottawa’s priorities in the Arctic from military to non-military concerns.

“We saw a lot of investment on the societal and environmental security, we might say,” said Trent University professor Whitney Lackenbauer, one of Canada’s foremost experts on Arctic security.

The Liberals’ specific focus on climate change and Indigenous relations in the Arctic coincided with a belief held by many countries that any disputes between various countries in the Arctic could be worked out through diplomacy and co-operation.

Some Canadian and American military officials had warned against being complacent as tensions between China, Russia and the West increased and rapidly rising temperatures made the Arctic more accessible to marine traffic and resource extraction.

But Russia’s attack on Ukraine has finally upended such assumptions and forced the Liberal government to recognize the importance of defending the Arctic, said University of Victoria assistant professor Will Greaves.

“That really constructive and positive vision of a non-conflictual, co-operative Arctic is a casualty of Russia’s invasion of Ukraine,” said Greaves, who is also co-ordinator of the North American and Arctic Defence and Security Network

“We will now be moving forward for whatever indefinite period of time in a new Arctic context that is almost structurally, much more conflictual, and will have a higher possibility or potentiality for armed conflict.”

Trudeau’s decision to attend Operation Nanook with Stoltenberg is considered not only the latest sign that Arctic security is back on Canada’s agenda, but an important one.

“I think it definitely does signal not only to Canadians, but to our allies, that we are taking Arctic defence and security seriously,” said Lackenbauer. “And that we're prepared to shoulder our part of the burden of collective defense in the Arctic and elsewhere.”

Other indications the government’s focus is shifting include a long overdue promise to invest billions with the U.S. on modernizing North America’s early warning system.

Some experts also pointed to Canadian Armed Forces commander Gen. Wayne Eyre having recently hosted counterparts from five other Arctic nations in St. John’s, N.L., the first such meeting since a previous grouping that included Russia was unofficially suspended in 2014.

The question of burden-sharing is a touchy one for Canada, which has consistently been among the laggards among members of the NATO alliance when it comes to defence spending ?— an issue that Stoltenberg will no doubt raise during his visit with Trudeau.

Details around the government’s promise to upgrade the North American Aerospace Defence Command with the U.S. have also been sparse, with uncertainty about when work on the shared defensive system will begin in earnest and what the results will be.

That is despite concerns about the state of the current system, including a string of 1980s-era radar installations across Canada’s Far North that are too old to properly detect an incoming Russian attack.

There are other needs, said Elinor Sloan, an expert on North American defence and security at Carleton University, including modern submarines to monitor and protect Canada’s Arctic seaways, new maritime surveillance aircraft and icebreakers.

The Liberals have started moving to address many of those gaps, while also quietly pressing ahead with most of the initiatives launched by the Harper Conservatives, but Sloan said it will be years before several become reality due to Canada’s procurement system.

“Its allies and friends within NATO are increasingly interested in and developing policies, and in some cases are operating in the Arctic,” Sloan said. “What’s Canada doing if it's not up there? So it's not just pressure from adversaries, it’s also pressure from allies.”

While Nanook has often focused on specific scenarios, such as responding to a plane crash or emergency at sea, military spokesman Capt. Jason Rheubottom said the focus this year is different. "The mission for this iteration is broader in scope: to project and sustain forces along Canada’s Northwest Passage in order to demonstrate CAF presence and engagement in the region, and enhance CAF all-domain awareness in the Arctic."