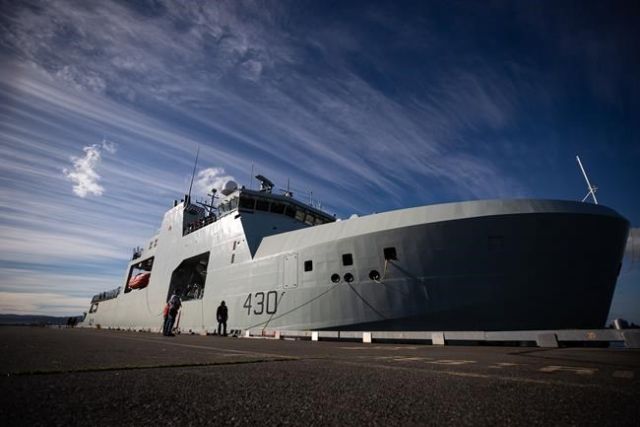 Photo: The Canadian Press
The Royal Canadian Navy's newest arctic and offshore patrol ship, HMCS Harry DeWolf, docks in Victoria, B.C., after arriving from Vancouver on Sunday, Oct. 3, 2021.The warship has been forced to abandon a mission to the Arctic because of a broken diesel generator. THE CANADIAN PRESS/Darryl Dyck

A mechanical breakdown has forced one of Canada's newest warships to abandon a mission to the Arctic.

HMCS Harry DeWolf was en route to join Operation Nanook in the Far North when one of its four diesel generators failed on Wednesday, The Royal Canadian Navy confirmed Friday.

As a result, the ship was turned around and sent back to its home port in Halifax for repairs, the navy said in a statement on Twitter.

The navy described the failure as an "isolated incident" that did not affect any crew members or other systems.

The voyage would have been the second trip to the Arctic for the vessel, the first Arctic offshore patrol ship built at the Halifax Shipyard as part of Canada's national shipbuilding strategy. The warship was delivered to the navy on July 31, 2020, and was commissioned on June 26, 2021.

In December 2021, the ship completed its first operational mission: a four-month deployment that included sailing through the Northwest Passage, crossing the Arctic Circle and circumnavigating North America.

Earlier this month, the ship left Halifax to take part in Operation Nanook, an annual multinational mission aimed at promoting Arctic security. The two-month mission calls for community relations, scientific trials and patrols along the Northwest Passage, with assistance from the United States Coast Guard, the Royal Danish Navy and the French navy.

The Canadian-led mission is expected to be completed by crews aboard the Arctic patrol ship HMCS Margaret Brooke and the Kingston-class coastal defence vessel HMCS Goose Bay.

The mission marks the first operational deployment for the 103-metre HMCS Margaret Brooke, which was delivered to the navy in July 2021.

The annual operation to the Arctic, which started in 2007, features up to four deployments throughout the year.