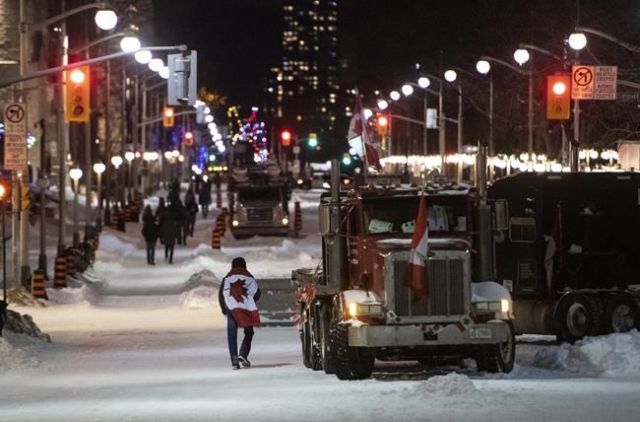 Photo: The Canadian Press
A person wearing a Canadian flag walks along Wellington Street where a number of trucks had cleared from an encampment across from Confederation Building.

Newly disclosed documents show federal intelligence officials warned decision-makers that the police dispersal of "Freedom Convoy" protesters in Ottawa last winter could prompt an "opportunistic attack" against a politician or symbol of government.

The Feb. 24 "threat highlight," marked Secret/Canadian Eyes Only, also advised that extremist "influencers" would leverage the outcome of the protests for continued recruitment and propaganda, regardless of whether COVID-19 pandemic restrictions were relaxed.

Ideologically motivated extremists would likely use police enforcement "to encourage violent revenge or as further evidence of government 'tyranny,'" the four-page assessment said.

The partially redacted memo, obtained by The Canadian Press through the Access to Information Act, was among several Integrated Terrorism Assessment Centre analyses produced before, during and after the protests that paralyzed downtown Ottawa for three weeks beginning in late January.

The centre, overseen by the Canadian Security Intelligence Service, brings together security and intelligence professionals from various agencies to draft terrorism threat assessments, based on classified and open-source information, to share with partners at home and abroad.

The aim is to provide senior decision-makers with the latest and most detailed information to assess the overall threat and risk level.

Protesters, many with large trucks, occupied central Ottawa streets to rail against COVID-19 health measures and Justin Trudeau's Liberal government. The influx, including some participants who had roots in the far-right movement, prompted many businesses to shut their doors and aggravated residents with noise, diesel fumes and harassing behaviour.

On Feb. 14, the government invoked the Emergencies Act, which allowed for temporary measures including regulation and prohibition of public assemblies, the designation of secure places, direction to banks to freeze assets and a ban on support for participants.

Authorities towed away trucks, arrested more than 200 people and laid hundreds of charges.

Extremist ideologues portrayed the police response as "brutality" and the use of the Emergencies Act as further evidence of federal "tyranny," comparing the government tactics to those of foreign dictatorships, the Feb. 24 assessment noted. It added that several online incitements to violence had surfaced, with some implying that direct action against politicians, police and even their families was the only option left.

"That's something that typically happens with these sorts of movements," said Barbara Perry, director of the Centre on Hate, Bias and Extremism at Ontario Tech University.

"When you push back against them, they use that as yet more evidence that they're the ones under attack, that their assessment is right, that they are being silenced, that they are the ones being marginalized and threatened by that tyrannical state, as they like to call it."

"The perceived notion that societal resilience is fragile, or that the government/police response justifies violent resistance, could inspire a lone actor or small group inspired by IMVE to conduct an opportunistic attack against a political figure or symbol of government," the analysts concluded.

"Supporters of IMVE will continue to encourage, and capitalize on, anti-government sentiments and protest movements, whether related to the pandemic or other issues, in an attempt to degrade public confidence and social cohesion, and to attract vulnerable individuals to their ideological cause."

The future loosening of public health restrictions might calm the protest movement, but people who embrace violent extremism, particularly those "wanting to accelerate the demise of current social and political orders, are unlikely to be placated," the assessment said.

"IMVE threats to political figures and government symbols will persist into the foreseeable future."

The national capital would see followup protests, including a late June procession that included many of the figures involved in the winter events.

"They've really set the stage and drawn more people in around a broader distrust of government, science, academics, media — all of those institutions," Perry said. "So, I think they'll continue to find ways to exploit those anxieties, exploit those grievances that they've helped to create, or at least exacerbate."

The terrorism assessment centre began tracking the truck convoy headed to Ottawa as early as Jan. 26, producing a secret assessment that flagged the possibility of opportunistic violence on the margins of the protest.

A Feb. 3 analysis said a co-ordinated terrorist attack or a planned storming of Parliament Hill or other federal locations were unlikely.

"The most likely IMVE-related scenario involves an inspired lone actor using available weapons and resources such as knives, firearms, homemade explosives and vehicles in public areas against soft targets, including opposition groups or members of the public."