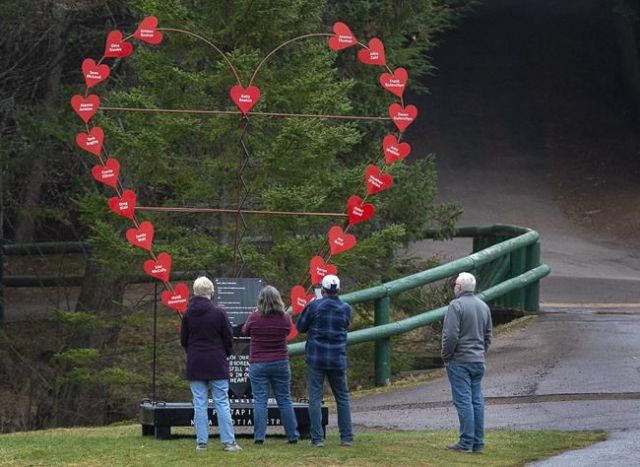 Photo: The Canadian Press
Visitors pay their repects at a memorial honouring the victims of the April 2020 murder rampage in rural Nova Scotia, in Victoria Park in Truro, N.S.

A former Supreme Court of Canada judge working with the inquiry into the 2020 Nova Scotia mass shooting says he's worried that the federal Justice Department has been discouraging witnesses from being forthcoming with relevant evidence.

In an Aug. 5 letter to the department, Thomas Cromwell cited advice the department gave Nova Scotia RCMP Chief Supt. Chris Leather before he testified before the commission of inquiry on July 28.

Cromwell said he was "deeply concerned" by Leather's claim that he was advised "to be simply reactive rather than forthcoming," an approach that Cromwell said "will hamper the commission in fulfilling its mandate."

Leather testified that in an earlier interview with commission lawyers, he didn't say anything about emails or a phone calls related to an April 28, 2020, meeting he attended with RCMP Commissioner Brenda Lucki because Justice Department lawyers had suggested he take "a reactive posture.”

He said he was advised not to proactively disclose the conversation with Lucki or the emails leading up to the meeting.

The April 28 teleconference, led by Lucki, focused on the effectiveness of the Nova Scotia RCMP's news conferences in the days after a man disguised as a Mountie fatally shot 22 people on April 18-19, 2020.

That bombshell assertion has prompted allegations of political interference in a police investigation, an allegation that is being investigated by a parliamentary committee.

In a letter responding to Cromwell's concerns, the Justice Department said its lawyers did not discourage Leather from being forthcoming, saying his comments about what he was told "can only be the result of a misunderstanding.”