'The future of science in Canada is at risk': Researchers call for pay raise

'Future of science at risk' 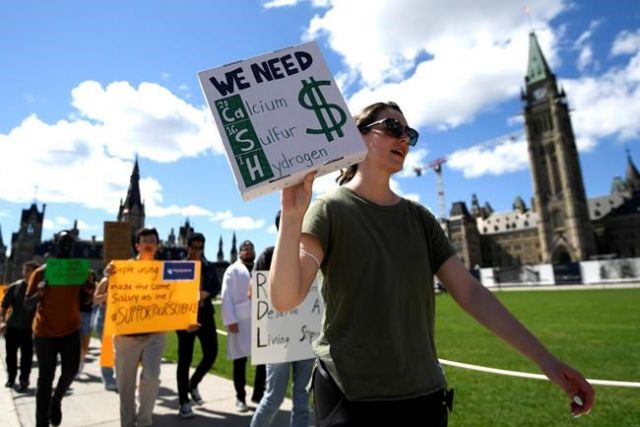 In a University of Ottawa lab, Sarah Laframboise is hoping to advance cancer research by studying a gene that causes the disease in humans. Her research works with a "model organism": tiny fungi that have a surprising amount in common with us.

"Yeast and humans share about 20 to 30 per cent of the same genes," she said. "The goal of that is really to find underlying mechanisms that cause different disease states."

The 27-year-old has always dreamt of being a scientist. After a decade in university, she's nearly finished her PhD and has amassed around $100,000 in student debt.

"I've often worked many jobs at once just to make ends meet," she said. "When I started my master's, I had to take out additional loans because you're then not allowed to work outside of the lab."

But the awards have not increased in years. Laframboise earned $21,000 annually until last year, when she got a scholarship from the Natural Sciences and Engineering Research Council for $35,000.

She's not alone — funding has become a central issue for the on-campus group she leads, called the Ottawa Science Policy Network.

The group says many scholarships amount to less than minimum wage.

That's the reason for an online petition calling on the federal government for raises. It has more than 1,000 signatures and will be presented to Parliament in the fall.

At a rally on Parliament Hill Thursday, dozens of researchers carried an open letter signed by thousands of their colleagues, printed out on sheets of paper joined to make a 60-metre-long train, to symbolically present to Prime Minister Justin Trudeau and Science and Innovation Minister François-Philippe Champagne.

They're asking for award funding amounts to be increased by 48 per cent to match inflation since 2003, and to be indexed to inflation to keep up. They also want government to create 50 per cent more graduate scholarships and post-doctoral fellowships.

Jeanette Whitton, an associate professor of botany at the University of British Columbia and president-elect of the Canadian Society of Ecology and Evolution, said she benefited from financial support as an early career scientist, but in today's financial reality "I don't think I could have made it."

"I'm worried, because never before have graduate students and post-doctoral researchers been so financially stretched that their future careers are at risk. And this means the future of science in Canada is at risk."

Champagne was not made available for an interview. In an emailed statement, a spokeswoman for his office said the value of post-doctoral fellowships has been increased to $45,000 a year.

Asked to respond to the group's raise requests, Laurie Bouchard said the government "will continue to work with (the research community) to explore ways in which we can continue to support our next generation of researchers."

"We're going to lose highly trained individuals to other locations that will pay them," Laframboise said. "I don't have aspirations to stay in academia, but if I did, it would not be in Canada."

A House of Commons science and research committee report released in June recommends creating more scholarships and fellowships, giving researchers a 25 per cent raise, and indexing the award amounts to the consumer price index.

It also called on the government to review and increase its funding of the three granting councils and to find ways to improve the continuity of funding they provide to researchers.

The committee said it heard from Universities Canada that doubling the number of available awards and increasing their value by a quarter would cost an estimated $770 million over five years.

"Many people my age are thinking about starting a family, getting married, buying a house," Laframboise said.

"My younger brother, he's doing his apprenticeship in trades. He's 20 years old and has way more savings than I can even imagine having. So I think that just gives a really good example of the disparity."