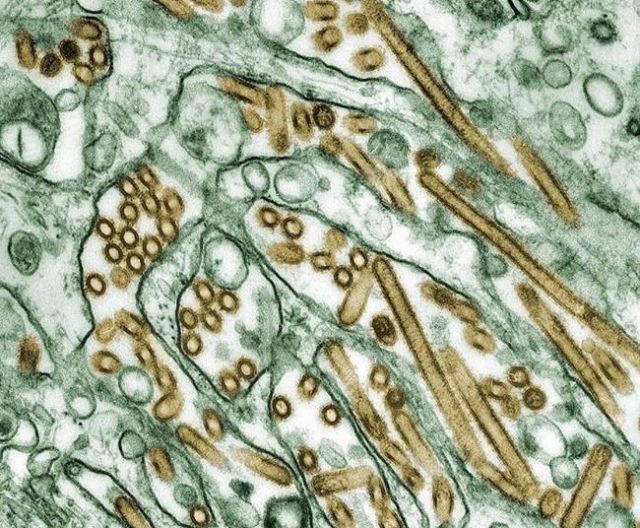 Photo: The Canadian Press
Colorized transmission electron micrograph of Avian influenza A H5N1 viruses (seen in gold) grown in MDCK cells (seen in green) as shown in this undated handout photo. A Quebec marine mammal research group says the virus could be responsible for a high number of dead seals being found in the province.THE CANADIAN PRESS/HO-CDC/Cynthia Goldsmith via NIH *MANDATORY CREDIT*

Quebec researchers have detected avian flu in at least two species of seal, and they fear the virus is to blame for the unusually high number of dead seals reported on the province's shorelines.

A marine mammal research group, the Réseau québécois d'urgences pour les mammifères marins, says about 100 harbour seal carcasses have been found since January along the south shore of the St. Lawrence River in eastern Quebec — almost six times more than in an average year.

"In June alone, the number reached 65 carcasses," the research group said in a statement on Tuesday. "Avian influenza was quickly suspected of playing a role in the increasing mortality."

About 15 of the dead harbour seals have tested positive for the highly pathogenic H5N1 avian flu, with a first case detected in a grey seal last week, said Stéphane Lair, a professor of veterinary medicine at Université de Montréal.

He said the seals most likely were in contact with carcasses of infected eider ducks when they came ashore to give birth at the beginning of the summer.

"Some seals, including the grey seal, are known for eating wild birds … but not harbour seals," Lair said in an interview on Wednesday. "They are curious, they will smell carcasses."

Jean-François Gosselin, a biologist with Fisheries and Oceans Canada, said these are the first reported cases of the virus being passed from wild birds to marine mammals in Quebec. The first H5N1 flu cases are believed to have arrived in North America at the end of winter, involving birds that migrated from Europe.

"It's already difficult to count the number of seals that are alive … carcasses that are beached, or floating between rocks, is even harder," Gosselin said. He added that it's difficult to monitor all transmission, which most likely is affecting other species — on land as well as marine mammals.

Gosselin and Lair both said that while they are monitoring the situation, there is no threat of transmission to humans or of endangering the seal population.

"It's normal with an exotic virus … it's a new virus that enters a new population that was never infected," Lair said. "The mortality rate will be way higher than if the virus was already circulating naturally."

"We need to be careful about all predators or animals that could be in contact with wild birds," Gosselin said.

Both recommended that people avoid approaching or touching animal carcasses and keep their pets, particularly dogs, away.