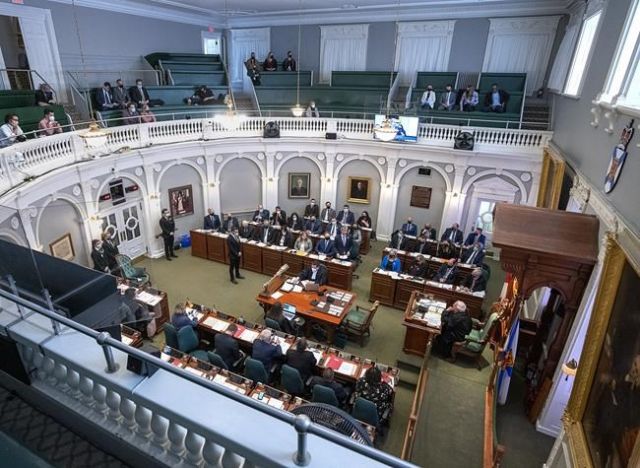 Nova Scotia’s legislature wrapped up a short summer session on Tuesday with the passage of a bill rescinding a recommended 12.6 per cent pay raise for its members.

The amendments to the House of Assembly Act see the base salary for each member of the legislature remain at $89,234 — a figure unchanged since 2013. The bill also includes an $11,246 pay cut for Premier Tim Houston, dropping his current annual salary to $190,754.

“It was really important to us (government) that the pay raise get stopped,” Houston told reporters ahead of the vote. “We’ve done the right thing by Nova Scotians in being here.”

The Progressive Conservative government convened the emergency session on July 26 to cancel binding recommendations made last month by an independent review panel that examined the compensation package paid to House of Assembly members. The legislated review was set in motion following last summer’s provincial election and was authorized by Speaker Keith Bain on May 30.

Although it endorsed a raise, the review panel also said in its report that legislature members could return the more than $11,000 hike to the province or donate the money to charity. But Houston said convening the legislature was necessary at a time when the public is struggling with inflation.

“Certainly the time is not right,” Houston said. “It (pay) has been frozen for 10 years and at some point in time that’s going to have to be looked at, but it’s just not today.”

Both opposition parties said Tuesday they would support the legislation, but they questioned why there needed to be an emergency session.

“This whole session was to try to get a positive news cycle for the government at a time when there are bigger issues going on that we need their action on,” Liberal Leader Zach Churchill said.

Churchill added that house members voting on their own salaries amounts to a “political conflict of interest.”

“But we don’t need to be doing this now,” Chender said. "Every time (a member) has to vote on something that impacts them it gets messy, and we are not talking about the things that matter.”

Lori Turnbull, a Dalhousie University political scientist, said that while a legislative session in the middle of summer is unusual, it wasn’t altogether unwelcomed by the opposition parties.

Turnbull noted that both Churchill and Chender were only recently elected to lead their parties. “They had a particularly pressing desire to get their voices heard,” Turnbull said.

And although the opposition parties used the weeklong session to highlight issues such as the cost of living and problems in the health-care system, Turnbull said Houston emerged largely unscathed. However, she also said the premier won’t get a lot of credit either with the wider public for blocking the pay raise.

“People would expect, I think, that he would not go ahead with a raise given the financial situation more broadly right now. I think people would assume that this was the only politically reasonable choice.”

Turnbull added that with much of the public on vacation, it’s likely the session was “not on most people’s radar.”