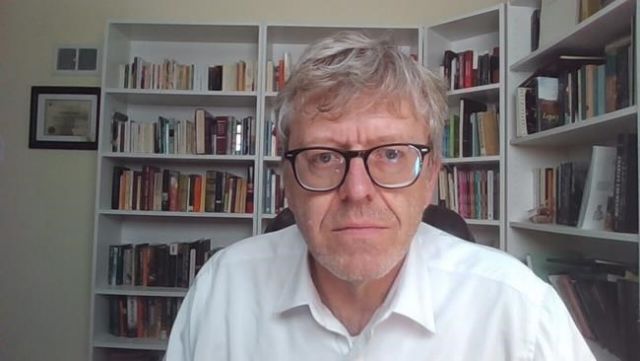 Photo: The Canadian Press
Raymond Frogner, head archivist for the National Centre for Truth and Reconciliation.

Raymond Frogner says when he found images of residential school students in the Missionary Oblates of Mary Immaculate archives in Rome, he knew he was looking at something important.

“It did have a very historic feeling to it, very profound," the head archivist for the Winnipeg-based Centre for Truth and Reconciliation said in a recent interview with The Canadian Press.

Few archivists are able to explore the religious order's private records in the Italian city, Frogner said. But he spent five days early last month looking through the archives at the Oblate General House, where photos, personnel files and manuscripts describe the group's actions around the world since its founding in 1816.

That legacy includes a significant presence in Canada.

Frogner pored through the archives in the former residence of an Italian nobleman. He worked in front of a statue of the Virgin Mary and a large fresco nearby depicted Jesus and the founder of the Oblates, Eugène de Mazenod.

But his interest was sparked by what was inside a set of metal drawers.

"The big find for me was in the photographs."

There were 20 drawers of photos and three of those contained images of the order's missions in Canada. Many depicted children in residential schools in the early 20th century.

Frogner said he suspects there are up to 1,000 photos that could be important to understanding what happened in Canada.

"Not to my surprise, the archivist at the archives there had no idea the significance of what they were holding," he said.

The next step is to work quickly to digitize the photos, the National Centre for Truth and Reconciliation and Oblates said in a recent joint statement. The images are then to be transferred to the centre in Manitoba.

"The records we assessed will help compile a more accurate timeline of Oblate members at residential schools throughout Canada," said Stephanie Scott, executive director for the centre, in a statement.

Frogner said the hope is to work with communities to identify the students in the photos.

"For us, as we go through records and try to uncover the destiny of children that have been lost, these are photographs that might indicate at certain points in time where these children were located," he said.

Frogner brought with him a list of priests known to have committed crimes against children.

He looked through personnel files on the actions and locations of priests. While none of those files contained information about crimes, Frogner said they showed priests moving locations frequently, having difficulty working with children or advising a priest to get married and leave the order.

Frogner said he did not have enough time to fully parse those records. After the images are digitized, he hopes to examine the personnel documents more fully.

The order's long-standing practice is to keep personnel records sealed for 50 years after a member’s death. The order has said it is taking steps to accelerate access to the files.

The Oblates have already provided the national centre with more than 40,000 records and 10,000 more have been digitized.

The Royal British Columbia Museum received about 250 boxes of materials, a third of which relate to residential schools, from the Oblates beginning in 2019.

There are also agreements between the Oblates and other archives to transfer relevant records.

Frogner said he knows his recent findings are of particular importance as Pope Francis visited Canada last week to apologize for the role members of the Roman Catholic Church had in residential schools.

Throughout the papal visit, Indigenous leaders urged the release of all documents related to the institutions.

The Oblates have previously apologized for their involvement in residential schools and the harms they inflicted on Indigenous Peoples. Rev. Ken Thorson of the OMI Lacombe Canada based in Ottawa said in a news release that transparency is critical to truth and reconciliation efforts.

“While it has been a constructive year of partnership, I know that these steps are only the beginning of a continued journey towards truth, justice, healing and reconciliation."